Just when everyone thought that the Panama Papers were old news (except for the fact that scandals keep erupting in Malta because of the Police Commissioner’s failure to investigate allegations), a new sizeable cache of documents from the same source was leaked.

The new leaks revealed that while Police Commissioner Lawrence Cutajar saw no reasonable suspicion to investigate tourism Minister Konrad Mizzi and his chief of staff Keith Schembri on the secret companies they set up in Panama, the authorities in Panama and New Zealand did, The Times of Malta reported on Sunday.

Nexia BT had told Mossack Fonseca that these accounts were to be populated to the tune of $1m a year by two Dubai-based ’target clients’ called 17 Black and Macbridge — meaning they planned to do business with them.

The FIAU had traced substantial payments made to 17 Black from a company involved in the operations of the LNG tanker ($200,000) fuelling the Electrogas power station, and from a company owned by an Azerbaijani national ($1.4m) via a Latvian bank (ABLV) recently closed down due to money laundering violations.

Mizzi and Schembri have never revealed who the people behind these two companies are. Leaked WikiLeaks cable reports drawn up by the US State Department in 2010 describe Khangah, who holds both Azerbaijani and Iranian citizenship, as “the CEO or ‘frontman’ of a substantial portion of the huge business empire of of the Azeri Minister of Emergencies – Kamaladdin Heydarov.

Heydarov is often described as the most powerful minister in the Aliyev government. According to the US State Department he “controls more visible assets and wealth within the country than President Aliyev”.

Malta enjoys an uncomfortably cosy relationship with Azerbaijan. In March 2017, Freedom Files – an NGO that conducts research on human rights and democracy problems in authoritarian countries published a detailed report which revealed that “Malta is considered by Azerbaijani oligarchs as one of the “provinces” of Azerbaijan.”

Azerbaijan has been ruled by Ilham Aliyev since 2003, and he still rules the country. There is no shortage of allegations of breaches of human rights, suppression of free speech and media, and corruption in Azerbaijan.

It is the 122 least corrupt nation out of 175 countries, according to the 2017 Corruption Perceptions Index reported by Transparency International.

Malta’s relationship with Azerbaijan became increasingly close and intricate following the furtive visit that Prime Minister Joseph Muscat, his chief of staff Keith Schembri, his communications coordinator Kurt Farrugia and then Energy Minister Konrad Mizzi made to the country in December 2014. They met President Ilham Aliyev. No government officials, civil servants or journalists accompanied the delegation. It is understood that the discussions centred on fuel supply and that Mizzi signed a memorandum of understanding with SOCAR – the State Oil Company of the Azerbaijan Republic.

SOCAR has an 18 year exclusivity agreement for the supply of LNG, which fuels the new power station. SOCAR does not produce LNG and purchases it from Shell, The Guardian reported. It then sells the LNG to Electrogas, the consortium operating the new power station, and Electrogas in turn sells it to Enemalta.

Along the way, steep profits are made at a cost to taxpayers in Malta. Malta has paid nearly twice the market rate for LNG and lost $40m because of this arrangement. The contract was deemed to be highly suspect by the FIAU for a number of reasons.

The report by the Freedom Files also shows Malta as one of the key locations where corrupt Azerbaijani officials keep their money.

Several members of the ruling elite of Azerbaijan held accounts in Pilatus Bank. The owner of the bank, Ali Sadr Hasheminejad, has since been apprehended in the US by the FBI and is facing charges that carry a penalty of up to 125 years imprisonment.

Caruana Galizia also said the company’s incorporation documents were held at Pilatus Bank, and that Dubai based company Al Sahra FZCO made a single payment transaction of US$1.017m to Egrant, besides frequent payments of US$100,000. 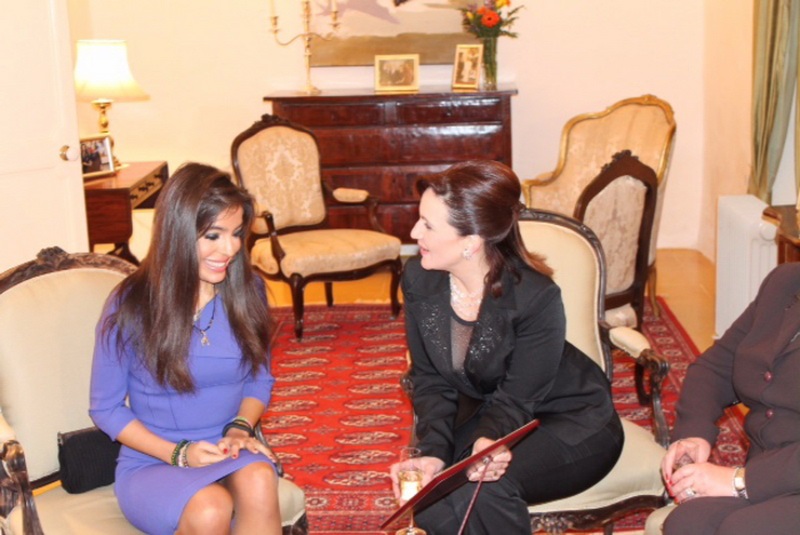 Michelle Muscat withLeyla Aliyeva of Azerbaijan, in Malta in 2014.

A magisterial inquiry into these claims has been ongoing for more than a year.

The same evening Caruana Galizia published her story, Ali Sadr was captured on live TV by Net News leaving the bank through the back door and heading to his car with full suitcases suspected to contain documents. A few hours later, a private jet owned by Vistajet with no passengers on board flew to Baku. Ten days later, Vistajet was inexplicably given a €1 million “sponsorship” by the Malta Tourism Authority.

Joseph Muscat and his wife have denied the allegations.

The Guardian reported that accounts at Pilatus owned by Azerbaijan’s ruling elite were used to “move millions around Europe” and that their accounts constituted the majority of its €250 million deposits.

Khangah, who Efimova said is behind 17 Black, is a close associate of Heydarov, who had a number of companies registered in Malta which were incorporated by Nexia BT. Their company account was also opened at Pilatus Bank. Khangah also co-owned a company registered in Dubai with members of Heydarov’s family.

This closeness with Azerbaijan is relatively recent – it was Muscat’s 2014 secret visit to the country that first brought this new relationship to light. The links to the contracts and the people behind the deals only became public as a result of investigative journalism. It begs the question: what else is the government hiding?