The article has been updated to include comments from architect Yanica Zammit and highlight the fact that the project was led by MADE Studio.

The architect who signed off on the plans for the primary school in Msida that the Foundation for Tomorrow’s Schools (FTS) has ordered to be partially demolished is a member of the evaluation committee of the same Foundation.

In May, The Shift reported that the school, originally scheduled to be finished three years ago, was not only delayed but also needed additional funding due to structural issues stemming from the project’s design.

Sources familiar with both Zammit and MADE Studio confirmed that during 2018 – 2019, when both applications were filed, Zammit was an employee at the studio. While Zammit signed off on the documents that were submitted to the Planning Authority, MADE Studio was contracted to oversee the works. 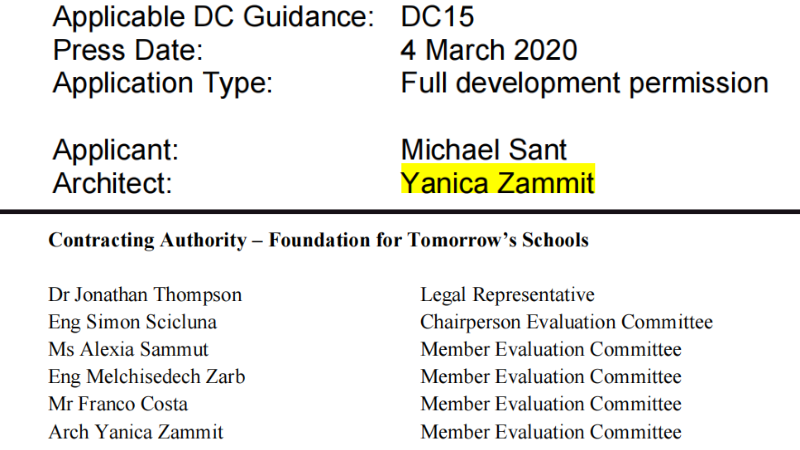 Top: The case officer report for the PA application filed by FTS lists Yanica Zammit as the architect for the project.
Bottom: An extract from a Public Contracts Review Board case in which Yanica Zammit was listed in her role as a member of the FTS’ evaluation committee.

Yanica Zammit is the architect on the FTS’s evaluation committee, and her name is on documents submitted to the Planning Authority when plans for the school were submitted. The contractors who built the original design were C&F Building Contractors Ltd.

The Msida primary school project was announced in 2017 when the original building was demolished and set to be replaced. The new plans were supposed to lead to a school that would house 500 students. Instead, the school has been closed for five years.

Msida’s primary school, which the government promised would be finished by 2019, needed more funding to make up for severe issues flagged.

Today, the school is being demolished again, with another architecture firm TBA Periti brought in to assess the situation and provide advice on resolving the structural deficiencies flagged by the FTS in its announcement.

In June, The Shift reported how insider sources from FTS described the foundation’s working environment as “toxic” and subject to political favouritism at the hands of its CEO, Neville Young. Young did not respond to questions on any matter, including questions about the Msida primary school project.

The Shift’s sources described how the Msida primary school project had gone over budget by May. The school in Msida is not the only issue. Another primary school in Qawra is facing similar problems.

The Qawra school project was completed three years late and €13 million over budget. Yet until February, despite being open for two years, the school was not certified as compliant.

During its construction phase, a 23-year-old man working for GP Borg Group, the contractor in charge of the project, died in an accident. The outcome of the investigation is unknown.

Following the publication of the story, Yanica Zammit sent in the following comment:

“My involvement in the mentioned project was limited to the initial design stage in 2018. In fact, my involvement in the project was over by the time the approval of the development permit was issued by the Planning Authority in 2019. No works were carried out by myself in the structural design or implementation of the project. As is the practice with such projects, structural works and implementation were awarded to a separate outsourced architect. I am still, to this day, gainfully employed with FTS since I have had no association with this project post initial design of the project, and prior to the actual approval of the development permit on 2 May 2019.”

The Shift is following up on investigations to find out which architects the FTS chose when outsourcing the work.

These people are criminals from whichever angle you want to look, criminally incompetent with only their bank accounts to consider. “Fuck you” is their first and last utterance when made aware of the total irrelevance their contribution is. Habibs at their best, should be considered the dregs of the real world with no place in a structured society.

To be honest, I really do not know what one can say. Is it sheer incompetence, bad management, corruption?
Two schools that millions have been spent and not attracting students to date.
SHAME

The Foundation for Tomorrow’s Schools had a string of successes in the construction of several brand-new public schools finished to the highest of standards, in time, and within strict budgets between 2004 and 2013, including the first phase of a seven-year-long planned MCAST project. Besides the many new childcare and kindergarten centres and new blocks added to existing schools such as the science block of the Higher Secondary School of Naxxar, which today is being used by Super Two (TVM) as a sort of studio to impress the Maltese gahan on a Sunday ‘science’ evening show.

All that magnificent work was carried out without any hype, in political silence, and to the great satisfaction of the teaching staff, and students and parents alike.

For every new school the FTS utilised the latest technologies as these became available and reliable from year to year. Among other technologies, from intelligent lighting to solar panels, the target of zeroing the electricity bill was reached in the Pembroke new primary school project. Besides, all new schools were blessed with rain-catchment systems saving rainwater in underground reservoirs which were then utilized for irrigation of the school green areas and planters and also for flushing of toilets.

After 2013, the Foundation for Tomorrow’s Schools fell into the hands of the Maltese Mafia, and the rest is history.

Nice one Shift Team. Many wanted to know who it was. On the other hand a school project going 13 million over budget is somewhat ridiculous, as it can cover the cost a school very well built in mainland Europe.

And the Minister of Finance, wants the ministries to save Euro 200 million up to end 2022, to avoid a higher deficit than budgeted, and to try to slow down the National Debt, which has gone up to Euro 9.1 million up to June 2022, with no sustainable infrastructural projects to show.
This is typical Labour economic performances, when we ended up with regular water cuts, electricity cuts, drainage overflows, a bloated public sector draining private human resources and creating armies of watchmen, customer care representatives, messengers and public convenience attendants.
‘Ahleb Guz’ remains the engraved economic policy of Labour.

My guess is that too much money was spent on corruption and in the end only sand remained instead of concrete.

What a shabby result. Presumably, the Maltese will have to pay for this again in the end.

Too much Malta Mafia.

What would have happened, dear corrupt Labour government, if the school had collapsed during lessons?

There’s (no) room in the prison, ROBBER Abela?

This is a very serious case, not only because a worker lost his life in the process for ‘unknown reasons’, but due to this dualism which is continuously happening, people sitting on boards at the same time as they are involved in projects of same entity. Conflict of interests and cover ups galore to safeguard the interests of the inner circles. U man jaf x’tahwid jkun ghaddej minn taht. Alla biss jaf! This is the new standard of government’s entities. The PM appoints CEO’s tal-habba gozz, surely not based on their integrity and skills, to take control, manipulate and make cover ups where required. MAFJUŻI

This is the gross incompetence of the Partit Laburista fil-Gvern. It has to be reminded that the new Msida Primary school project has been the responsibility of all Partit Laburista ministers since 2013.
4 ministers, no joke, and none competent enough to complete the only new school project that the Partit Laburista fil-Gvern has undertaken. To add insult to injury, this, is at present, being demolished “ghax ahna l-affarijiet nghamluhom sew” was the present minister’s reply.
The Qawra school project, although still not certified, has began prior to 2013. As usual these incompetent ministers just inaugurated the PN project, years later than planned.
Quo Vadis education ministry?

FTS should be rebranded as Fraudulant Toxic scumbags.

Having someone accounting for the budget deficit big time, with nothing to show for it, is seriously criminal. I know someone who was sent to jail for stealing 10 euros to eat something. He was an orphan. In this case FTS took millions and nobody is seeking thier behaviour? Were is the financial crime investigation unit?

No remedy was made to have certain schools to be made safe and good for children to be at school.

Then an architect that has failed her job and all Maltese citizens paying the FTS board incompetance and sheer gross negligence. Smells of corruption all around.

this is pure corruption, but obviously if no one intervenes and if these characters always go unpunished they will always continue to do what they want …

unreported accidents at work, projects that cost three times the initial cost and architects who do not know their work ,then you go to court, but there will be a general attorney who will make a mistake and therefore the case will be extinguished…

This architect should be removed from the register, his other projects should be checked and his assets taken as bail.

This thing is very serious, we do not joke about playing with the lives of children, how can we be sure to send our children to schools under these conditions … how disgusting