A photo showing a bird being used as a live-decoy. Credit: BirdLife Malta

In yet another act of defiance against EU directives prohibiting the trapping of wild birds, the Maltese government issued a call for bids for ‘scientific bird-ringing services’ for a trapping season which is yet to be officially announced, only to cancel it a few days later.

The tender for these services, estimated at a value of €300,000, was based on a contested derogation the government filed in 2020 following the EU Commission’s decision to institute infringement proceedings against Malta.

The derogation allows for ‘scientific research’ involving clap-net systems, which means live decoy birds would be used to trap other birds. The derogation is limited to seven species of finch, and allows for a trapping season of up to 64 days. Following a ruling by the European Court of Justice which confirmed the ban, the original version of the derogation was scrapped in 2021 only to be reissued in a slightly altered form a few days later.

This derogation runs counter to EU regulations on the subject that call for trapping to be banned whether or not it is carried out under the guise of research. In November of last year, conservation NGO Birdlife Malta filed a judicial protest against the government for opening the season year after year without consulting with stakeholders and in defiance of EU directives.

The derogation has also been criticised for lax oversight. While trappers are, legally speaking, only allowed to trap, ring and release the birds after recording details about the physiology of each specimen, there is virtually no enforcement since nobody would be actively monitoring proceedings.

Prior to its cancellation, the tender stated that the “sole award criterion” that would determine the best bid was price, meaning that the cheapest offer would most likely have won. An email notification confirming the tender was cancelled.

Should the winning bidder have submitted an offer that hovered around the €300,000 estimate issued by the Department of Contracts, a full 64 day season would have cost taxpayers some €4,688 per day to fund this research.

The tender, issued by the Wild Birds Regulation Unit within the remit of the Gozo ministry, stipulated that finches are to be caught by “licensed data-collectors” and ringed by “bird-ringers” engaged by the winning bidder. The official time frame for submissions expired on 1 July.

The government also included a specific proviso stating that the contract was subject to a final decision on whether the derogation would be issued for this year. 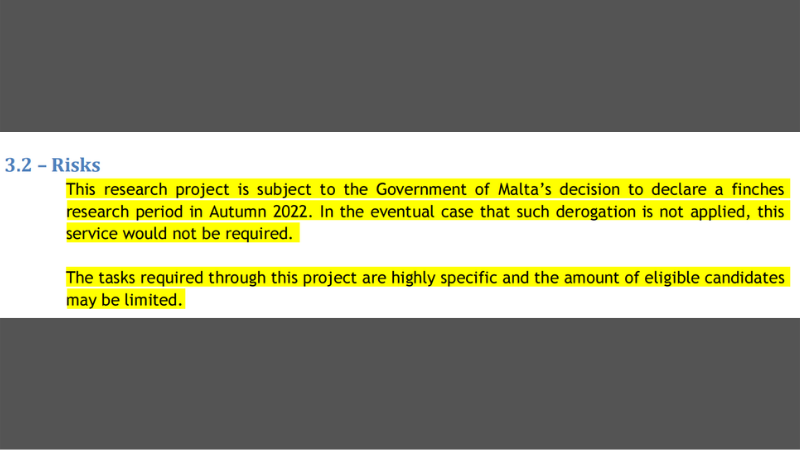 The extract from the tender showing the government’s proviso which allows it to revoke the contract if the season is not opened.

The winning bidder for this tender would have been required to hire a project coordinator with a master’s degree or its MQF equivalent in an area related to Natural Sciences, and have at least ten bird-ringers available to cover ten different regions in Malta in which trapping would be allowed.

The bird-ringers were required to have a valid bird-ringing license issued by a ringing scheme in their country of origin, one that is affiliated with the European Union for Bird Ringing (EURING).

However, the ‘special conditions’ section of the tender also stated that the Wild Birds Regulation Unit would be entitled to provide the successful bidder with temporary ringing licenses which would be supplied through the National Ringing Scheme of Malta.

In other words, the Wild Birds Regulation Unit was calling for licensed bird-ringers while also stating that it would provide temporary licenses to the winning bidder should they require it. Practically anyone would be able to apply with the assurance that such licenses could be dispensed if the National Ringing Scheme of Malta allowed for it.