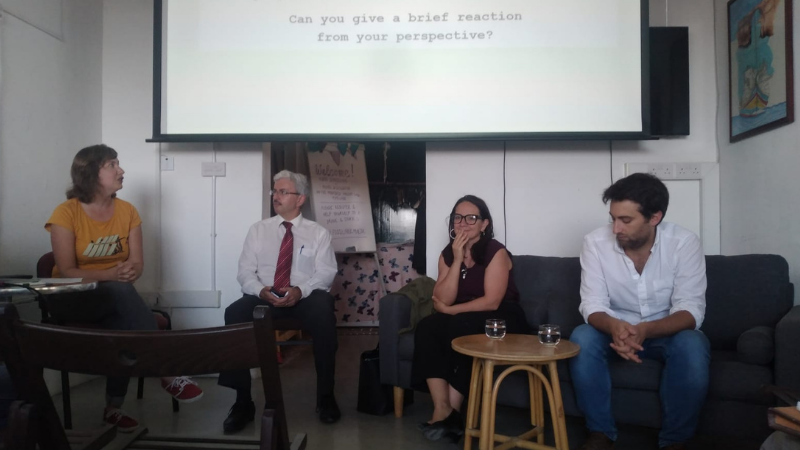 “We cannot continue like this. We cannot keep pushing fossil fuels, and we cannot keep making exceptions,” the coordinator for Friends of the Earth Malta’s new climate change campaign said at a public debate kickstarting the campaign.

Suzanne Maas, the coordinator, opened the floor on Thursday evening to announce the eNGO’s goals for their climate change campaign. One of the central demands of the campaign is the scrapping of the Melita TransGas pipeline, a €400 million project which, if approved, would connect Malta to Europe’s gas grid.

Besides the fact that the pipeline would essentially entail public and European Union funding being used to pay to transport a fossil fuel, an energy source that is one of the key factors driving catastrophic climate change, it is also linked with corruption.

One of the panelists at the debate was Matthew Caruana Galizia, the director of the Daphne Foundation which was set up to honour the legacy and work of his mother, slain journalist Daphne Caruana Galizia.

He explained that the Melita TransGas pipeline is linked to the Electrogas power station, a project which has been the subject of multiple investigations that have revealed the extent of the corruption surrounding it, was also linked with the assassination of his mother.

A public inquiry board set up in the wake of Caruana Galizia’s murder established that the state must be held responsible for enabling the climate of impunity that led to her killing.

It had also concluded that Caruana Galizia’s work on the Electrogas deal was the main reason the hit was commissioned.

Besides the infrastructural link between the pipeline and the Electrogas power station, the shareholders of the project stand to gain an estimated €84 million in tax-free compensation for the assets they would have to hand over once the pipeline is built.

“The pipeline is not an afterthought, it was something that was baked into the Electrogas project,” he said, referring to how one of the main shareholders of the project, Azerbaijan’s state-owned oil company SOCAR, leveraged its access to Maltese politicians to export its vast gas reserves by lobbying for a market for itself in Malta.

An investigation conducted by the Organised Crime and Corruption Reporting Project (OCCRP) and its partners had shown how Azerbaijan’s plans for expansion involved a network of companies that was used to launder €2.9 billion and, among other things, buy access to European politicians.

“The bribery started over a decade ago and it culminated with the murder of my mother. We have a moral obligation to not let the people who were behind the bribery and the murder to cash in,” Matthew Caruana Galizia added.

Besides the pipeline, two other main demands the campaigners are calling on the Maltese government to address are calling off all investment in new infrastructure for fossil fuel projects and securing enough domestic renewable energy production to cover Malta’s essential electricity needs.

In addition, the campaign is demanding that all imported electricity should also come from renewable sources, with the local supply being further boosted by community-based, small-scale energy projects.

The two other panelists present for the campaign launch debate, Professor Luciano Mule-Stagno from the University of Malta’s Institute for Sustainable Energy, alongside economist and fellow university lecturer Marie Briguglio, discussed the logistical aspects of the shift towards renewable energy.

Mule-Stagno, who voiced concerns over the feasibility of making an immediate shift towards renewable energy without considering Malta’s present need for a centralised power station, also spoke of the need for increased coordination between European member states.

Briguglio called for a policy change in terms of “sending the right signal” to both the general public and private businesses about over-consumption of energy and the fact that the most recent reports on climate change are cause for severe concern.

Good resume. Thank you Julian Delia.
There was also strong demand to better evaluate Malta’s potential in relying on its renewable energy in comparison to its usage. This of course needs to be limited and can be done so by lifting prices when overcoming set levels of usage.