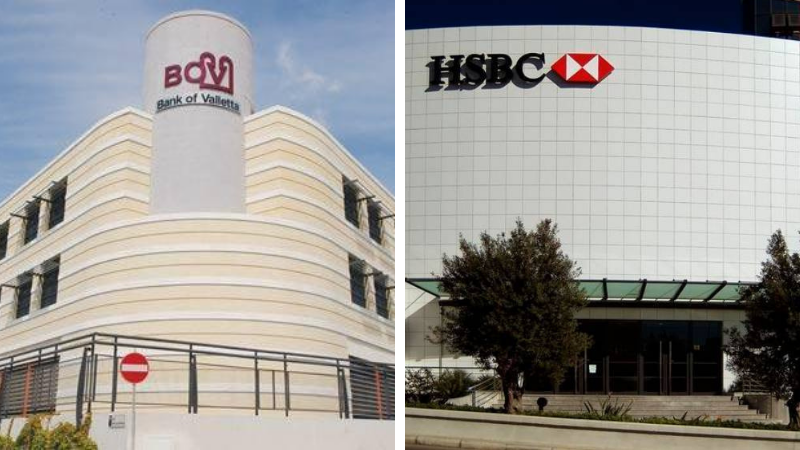 Investors in Malta’s two largest banks have suffered unprecedented losses during the last five years as the country’s reputation among international financial service providers nosedived due to a number of factors, the latest being Malta’s greylisting.

According to recent statistics, while Bank of Valletta shareholders saw the value of their shares decrease by a staggering 65% since 2017, HSBC shareholders didn’t fare much better since the bank’s shares traded on the Malta Stock Exchange lost more than half of their value in the last five years, recuperating only and possibly momentarily only in the last few days due to the anticipation of the latest financial results for 2021.

With regards to HSBC, which this week announced a €27 million profit before tax for last year, the share price per share traded at just €0.99 per share when, in June 2017, it had a value of €2.08 per share.

Banking analysts told The Shift that the tremendous loss of value in the shares of Malta’s two leading banks comes as no surprise as the country has been hitting the wrong headlines for far too long. They said prospects are dull at least until Malta continues to be on the international grey list.

Contacted by The Shift, Paul Bonello, a leading financial consultant dissected the reasons for the ongoing banking crisis.

While bank shares have been performing badly across the globe, particularly due to the 2008 financial crisis, Bonello said that there are national reasons for the bad performance of Malta’s two leading banks.

“Currently, the local market does not have much confidence in the future profitability performance of the bank as HSBC appears more intent on running down its local operations, disposing of assets or activities and outsourcing others wherever it can,” Bonello told The Shift.

“I believe that HSBC would have long ago sold its operations in Malta but evidently no international bank would in his wildest dream consider investing in greylisted Malta.”

Just a few years ago, the global HSBC CEO was reported casually asking himself what his bank was doing in Malta. It is an open secret that HSBC has been seeking ways to exit the island for the past few years.

With regards to BOV, problems are even more locally based. “BOV passed through one debacle after another,” Bonello said.

“These include the La Valette Property Fund, Falcon Funds, laundered Gaddafi accounts, receipt of Venezuela funds by Portmann for many years, acting as a surrogate for Pilatus Bank correspondent requirements, acting as the Labour government’s piggy bank for the gas power station for Electrogas and more. This all led not only to loss of shareholder value down all the way to the current price of €0.80 but also to lost bank correspondent accounts and a recent massive FIAU fine of €2.6 million.”

The financial expert told The Shift that the mother of all debacles for BOV remains the Dieulemar Trust as a result of the bank’s management entering into the Trust business without assessing the risks and liabilities that may be involved.

Just a few weeks ago, an Italian court ordered BOV to pay €363 million in damages over losses suffered by Deiulemar bondholders – a Trust the bank took over in 2009.

“Government administrations changed, chairmen and directors changed, but the steep direction downhill remained steady.  Inevitably, the bank will now have to make an accounting provision for the €360 million decision against it in Italy.  Although BOV has put aside the funds in Italy by way of a deposito cautelativo, the bank has so far only made a provision in its P&L (profit and loss) for €80 million and a provision for the difference of €280 million is inevitable.”

Bonello told The Shift that while recapitalisation of BOV by way of further share issue is very probable, in the current climate it is very doubtful if any investment other than government subscription will be available. “Whatever, any recapitalisation will cause major dilution of the current shareholders’ investments,” the financial analyst said.

I think the article fails to mention a no. of issues. Re the alleged failed sale of HSBC in Malta, we must not forget that even BOV and Lombard had been for sale for a no. of years and both found no buyers. The change in Govt led to BOV being removed from the market whilst Lombard’s majority stake was bought out ‘temp’ by the Govt (still there). It is a fact that internationally, M&A in the banking sector had been on the decline despite for one the EU pushing for more consolidation in the sector in a bid to reduce the no. of banks in Europe. The sector could be in its cash cow stage not just in Europe but globally hence no exponential growth can be taken advantage of. Interesting as well is the rise of smaller banks as APS focusing mainly on the housing market, which does bear its own risks, in my opinion. Let us also not forget the effect of negative interest rates & so on & so on. I would say that greylisting is just the cherry on the cake, but the cake was in the oven for much longer than that.

I suspect that in a few years we will no longer have the Bank of Valletta (BOV).
Run down by bungling management and dependent on a corrupt government.
Presumably there will be a replacement with the Bank of Malta (BOM)?

Robert Abela knows well that greylisting by FATF can’t be erased before political criminals involved in money laundering are investigated by the police.

Let’s be truthful, the reason that shares are falling is the shocking customer service, being charged for having too much money in your account, limits on daily transactions and the constant questions about where the funds are coming from. Along with transactions taking days rather than hours, no good for today’s business …

Will Malta keep playing both sides?