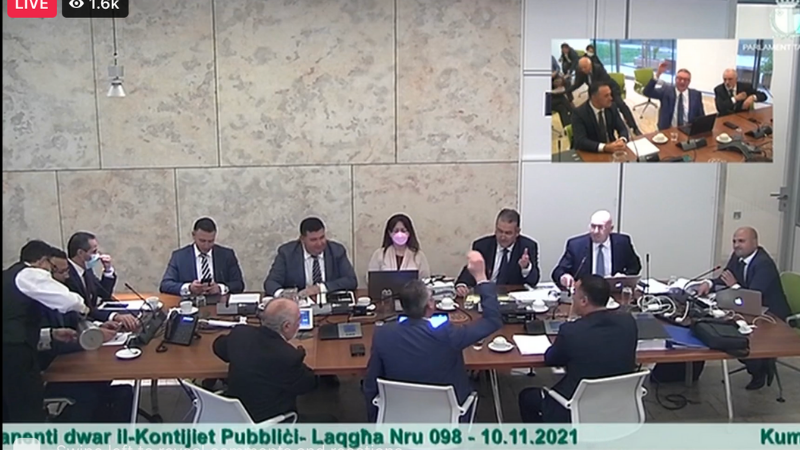 Disgraced former Minister Konrad Mizzi again avoided answering any of the Public Accounts Committee’s questions by eating up the time on a lengthy, rambling defence of the PL government’s decision to embark on the controversial Electrogas project.

Mizzi began his second appearance before the PAC probing the Electrogas project with a continuation of his long-winded ‘oral statement’ – this time focused on the “technical” aspects of the projects.

The former minister, who was accompanied by his lawyers, Carol Peralta and Jean Paul Sammut, declared that he intended to address questions raised in the Auditor General’s 2018 600-page report on the project, which detailed significant due diligence concerns in the tendering process for the construction of the new gas-fired power station in 2013.

In a protracted justification of the processes criticised by the report – why the government selected only one operator, why the decision to sign a gas supply agreement was taken, why the choice was to have floating gas storage unit rather than a land-based one, the government’s bank guarantee for Electrogas, among other issues – Mizzi also took the opportunity to aim a few barbs the way of the Opposition members of the Committee.

Mizzi’s statement droned on until the PN MPs interrupted his monologue about the European Commission’s response to the project by making a remark about the Montenegro wind farm. This sparked a shouting match between PN MP Karol Aquilina, PN MP Ryan Callus and Mizzi, with accusations of corruption and incompetence being thrown back and forth across the table.

Chairman Beppe Fenech Adami told Mizzi they’d decided to “let him rant on” – but clearly that plan fell apart at some point, as Aquilina and Callus began shooting digs at Mizzi, who didn’t fail to respond with ever-increasing agitation.

As the former minister defended his much-maligned gas supply agreement with SOCAR, Azerbaijan’s State oil company, Fenech Adami asked why Electrogas didn’t choose to purchase gas directly from the market, instead of paying what was at one time seven times the market price – resulting in millions of euros in profits for SOCAR. Mizzi replied that this is how hedging works – if SOCAR was profiting when gas prices were low, it’s now losing money because the market price of gas has risen far above the agreed fixed sum.

Mizzi insisted that the interconnector, the gas-fired power station and renewables all combined to produce the ‘energy mix’ that helps ensure security of supply for the country – this sparked another spat over how much renewable energy had been produced during the pre-2013 PN administration, which was confirmed to have been far less than that claimed by Callus.

Mizzi ended by saying he’d continue with his presentation, which is still only two-thirds completed, next week.

During his first appearance before the PAC last week, after he’d missed the three previous meetings to which he’d been summoned, Mizzi ate up the entire two-hour meeting with the first part of his extended ‘oral statement.’ The proceedings were interspersed with bickering, shouting and the trading of accusations with the Opposition members of the Committee.

Mizzi was exposed as having set up a secret Panama company in 2013, just days after the Labour Party won the general elections that year, by assassinated journalist Daphne Caruana Galizia. That company, Hearnville Inc., was later revealed by international media reports, as well as a report by the FIAU, to have been set up to receive kickbacks from Electrogas shareholder Yorgen Fenech.

Mizzi has been linked to a slew of major scandals over the past eight years: apart from his roles in the power station and related SOCAR gas supply rackets, he was closely associated with the “corrupt” public hospitals deal as well as the Montenegro windfarm scandal.

He has consistently failed to answer questions about his involvement in the project. When summoned to give evidence to the public inquiry into Caruana Galizia’s assassination in October 2017 – which has been linked directly with the corruption behind the Electrogas deal – he refused to respond to 100 questions that were put to him, instead (as he did before the PAC today) making a statement claiming he never took “kickbacks or rewards”.

Mizzi was forced to resign his ministerial position over his connections to the corrupt deals in 2019 and was later ousted from the Labour Party parliamentary group.

Why did Beppe Fenech Adami, Carol Aquilina and Ryan Callus let Konrad Mizzi deliver the most boring monologues during two sessions of PAC.? When will they start asking him the questions which matter; it seems he is the conductor of these meetings.

I can think of three reasons:

(1) Mizzi is under oath so any untruths told will make him liable to prosecution for perjury. While most comments and inaccurate observations can be dismissed as subjective political points, he has already, in my opinion, perjured himself multiple times.

(2) By making his presentation, Mizzi disavows his right to remain silent to avoid self incrimination. In fact it becomes a statement that he has given.

(3) There is the off chance that when he goes ballistic, his lack of self control might result in him saying something which he does not intend to. Today he was more guarded than last week. I suspect his lawyers had a good talk with him after last week’s deposition. I also find it interesting that at a point one of his lawyers requested a short break. I think Mizzi’s lawyers felt they needed to calm him down.

Mizzi is like a cannon ready to explode and when that happens God knows what will come out.

Will the Hon. Presentation ever be published?