Enemalta may have made a false declaration to the authorities in Montenegro, in breach of the law, and in so doing reduced its tax liability on the acquisition of the Mozura wind farm deal, documents seen by The Shift reveal.

In a recent statement, Enemalta admitted that it had “paid €3.5 million in December 2015 to secure the acquisition of the Mozura wind farm from Cifidex at the final price of €10.3 million”. The €10.3 million figure is also corroborated by Enemalta’s own audited accounts.

Yet, this was not the purchase price declared to Montenegrin authorities. In the Share Sale Agreement (SSA) dated 28 December 2015, the final sale price declared was €3.5 million. This was not indicated as a down payment or deposit, but the agreed full price on the deal. Excerpt from the Share Purchase Agreement between Cifidex and Enemalta clearly indicating the full purchase price as €3.5 million. This contrasts with the €10.3 million that Enemalta is saying was the actual full price.

The Shift is reliably informed that this difference is causing ripples in Montenegro since, on the face of it, Enemalta and its partners may have under declared the price for tax purposes. This is illegal, and yet it is the least of the problems surrounding this deal that involves an intricate web of corruption.

Enemalta issued a statement last Sunday in an attempt to rebut the investigation by Reuters, also published by The Times of Malta, that revealed payments to a UAE company owned by murder suspect Yorgen Fenech – 17 Black Ltd. The Dubai company was described in 2015 as one of two companies meant to pass on millions to Maltese politicians.

The acquisition of the Mozura wind farm was a complex endeavour involving a number of intermediaries and fixers, which the Shift has detailed in initial investigations into the project.

The original Public Private Partnership signed between the Montenegrin government and the Spanish renewable energy company Fersa Energia Renovables (Fersa) back in 2010 envisaged the construction of 23 wind turbines of 2MW capacity each. Although construction permits were issued, the deal almost fell apart in 2014 amid mutual accusations of extortion and bribes due between the Spaniards and the Montenegrins for the wind farm.

The Azerbaijanis ‘save the day’

In late 2014, after Fersa was effectively elbowed out by the Montenegrin government, the previously unknown Seychelles-based Cifidex Ltd stepped in and signed a promise of sale agreement (SPA) with Fersa on 12 February 2015.

At the time, Fersa had issued a public announcement linking Cifidex to Vestigo Capital but later retracted this part of the statement.

Cifidex is beneficially owned by Turab Musayev, an executive of SOCAR Trading, the Swiss-based subsidiary of the Azerbaijan state oil company – SOCAR, according to Reuters. SOCAR has strong business links in both Montenegro and Malta, the latter through the Electrogas deal, in which Yorgen Fenech, who is charged with masterminding the assassination of journalist Daphne Caruana Galizia, is also involved.

In the Electrogas deal, Maltese taxpayers are contractually bound to pay for LNG at rates far higher than the market price with SOCAR pocketing the difference.

Musayev was also SOCAR’s representative on the Board of Directors of Electrogas, a role he occupied with Fenech. Both resigned in November 2019 following Fenech’s arrest in connection with Caruana Galizia’s assassination in October 2017.

In Montenegro, SOCAR was embroiled in a controversial $500 million deal involving a high-end tourism resort in the former naval base in the Bay of Kotor. Originally, SOCAR had won a contract to develop this piece of land but the contract was later ‘given’ to a SOCAR subsidiary – Azmont Investments.

Azmont was later transferred to third parties and with it the $500 million deal. Companies linked to Vestigo acted for both SOCAR as well as Azmont (after the transfer) in this deal.

Journalists investigating this deal and the people involved found close links with President Ilham Aliyev and his family’s interests.

It is also well known that both the disgraced former Prime Minister Joseph Muscat and the current president of Montenegro Milo Djukanovic are close to the ruling Aliyev family with the former recently accepting a role with Aliyev’s foundation, as revealed by The Shift.

The dodgy promise of sale agreement

Although originally signed in February 2015, the SPA between Cifidex and Fersa went through a number of amendments before coming into effect just two weeks before Enemalta bought the same shares.

Research shows that Cifidex and Fersa amended this SPA five times due to various outstanding issues including the Lease Annex (which guaranteed the transfer of the 20-year energy concession from Fersa to Enemalta), Fersa’s alleged debt of about €285,000 to BWP Montenegro (BWPM) and the outstanding wind measurement fee of €1.675 million.

BWPM was a local subsidiary of the Spanish BWP Group registered for consulting services, but in reality, it appears that it was solely set up to channel illicit payments from Fersa to Montenegrin officials, according to sources involved in the deal.

The final fifth amendment agreement between Fersa and Cifidex was signed on 9 November 2015, just under a month after Enemalta signed its own SPA with Cifidex.

Excerpt from the third amendment agreement to the Cifidex share purchase agreement with Fersa dated 25 June 2015 in relation to the wind measurement fee which Cifidex (here the Purchaser), according to Enemalta, was meant to have paid.

The final agreement between Fersa and Cifidex also did not explain the outstanding debt of €285,000 and whether one of the parties paid off BWPM as had been planned in the original SPA.

Suspicious transactions on the Montenegrin side

In parallel with the SPA with Fersa, Cifidex also signed another promise of sale on 10 February 2015 this time with Celebic LLC, a Montenegrin company holding the remaining 1% share of the Mozura wind farm.

The owner of this company is Tomislav Celebic, a close friend and business partner of Montenegro’s strongman President Milo Djukanovic. Celebic was not available for comment to explain such a huge discrepancy in price. On the other hand, his company said no statement would be issued in “regard to the Mozura project as it happened a long time ago”.

As in Malta, the chances of Montenegrin prosecutors bothering to probe, let alone investigate, transactions concerning the friends and partners of the country’s ruler are extremely slim.

In Malta, assistant police commissioner and former head of the Economic Crimes Unit Ian Abdilla told the Caruana Galizia public inquiry on Wednesday that “Cifidex falls under the 17 Black investigation”. He also admitted that no letters rogatory were sent to the authorities in Montenegro on the deal revealed by The Shift three months ago.

It should come as no surprise that, apart from Azerbaijan, the UAE is another favourite destination for business and pleasure not only for Maltese but also Montenegrin elites. In fact, Dubai is exactly where Djukanovic flew to after the last visit of Muscat to Montenegro in November 2019, as citizens were on the streets in Valletta calling for Muscat’s resignation. Anti-corruption protest in Valletta, Malta, in late 2019 – one among a series that led to the resignation of former Prime Minister Joseph Muscat, his chief of staff Konrad Mizzi and Minister Konrad Mizzi. Photo: Pierre Ellul

Enemalta said in its statement that “it was unaware of any alleged transactions between Cifidex and 17 Black”.

Enemalta admitted it had paid a whopping €10.3 million to Cifidex for the Mozura acquisition just a fortnight after Cifidex purchased all the shares for €3.5 million, as documents in Montenegro seen by The Shift confirm.

According to Reuters’ findings, Cifidex borrowed €3 million from 17 Black to secure the Mozura wind park shares. Upon payment from Enemalta, Cifidex repaid the €3 million it had borrowed from 17 Black along with another €4.6 million of share profit, according to a source who spoke to The Shift (Reuters reported €4.8 million according to some of its sources).

It must be a coincidence that the “profit” of €4.6 million matches the amount that Fersa had, according to our sources, agreed to pay to BWPM for its “consulting services” and “softening up of Montenegro’s officials”.

Moreover, this €4.6 million figure or €100,000 per MW in Mozura (46MW was built in total) was also mentioned in the pending court case in Montenegro related to the fraud charges pressed against Fersa and BWPM by their two former intermediaries, Vladimir Popovic and Carlos Palou.

One can only speculate about the other figure quoted, €4.8 million, but this also reflects the amount of €285,000 that Fersa owed BWPM at the time when the SPA was signed in February 2015. 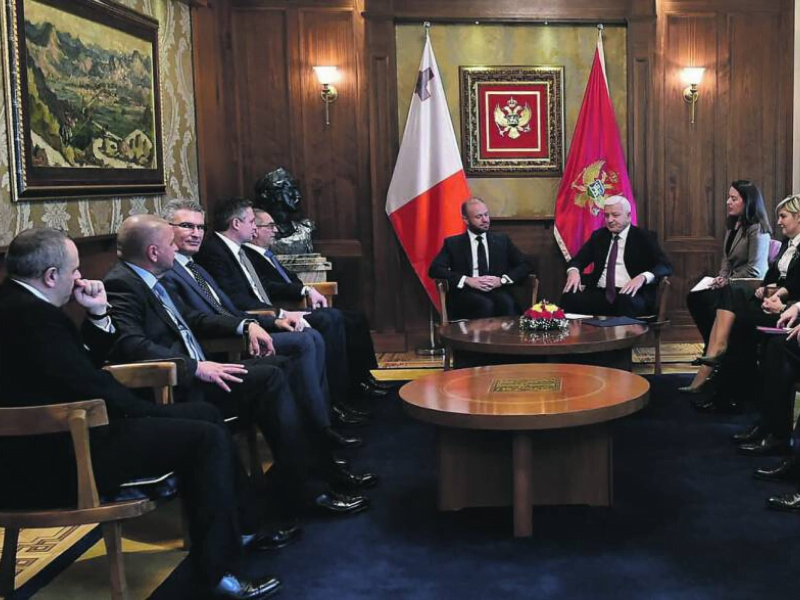 Mathematically, if €10.3 million was paid to Cifidex, which, in turn, paid €3.55 million to Fersa and Celebic, and €4.6 million or €4.8 million which matches the amounts due to BWPM, there is an unexplained gap of around $2 million(€1.8 million).

Enemalta partly explained the jump in price to €10.3 million as the “cost” of bringing the Mozura wind farm project from an “almost dead” state to “ready to build”.

The Shift could not separately determine whether the above payments were made and the larger part of those transactions are still shrouded in mystery.

However, just like with Electrogas in Malta, the Mozura wind farm project rips off Montenegrin taxpayers. The Montenegrin electrical utility (EPCG) is obliged to pay the Chinese State-led consortium now owning the Mozura wind farm about three times the regular market price for the electricity generated in Mozura – a gain of some €115.2 million in the next 12 years.

No wonder each of the Montenegrin, Azerbaijani and Chinese ‘socialists’ call the Maltese government their “friend”.

With reporting by Jovo Martinovic in Montenegro and additional reporting by Vladimir Otasevic in collaboration with DAN newspaper.