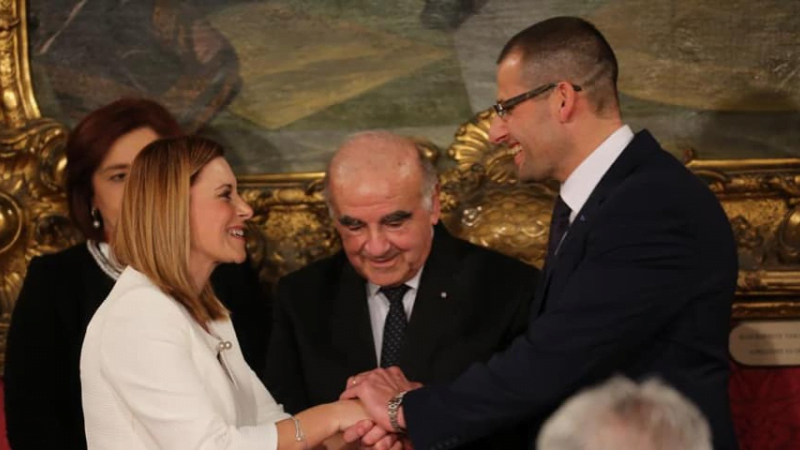 PM terminates €5,000-a-month consultancy to footballer but mum on action against Minister

Prime Minister Robert Abela would not say what action will be taken against one of his Ministers, Justyne Caruana, even as he announced that the €5,000-a-month consultancy contract she awarded to former international footballer Daniel Bogdanovic has been rescinded.

Last Sunday, Abela announced that he had immediately taken action to scrap the contract the Education Minister gave to her friend. He also said the private lives of politicians should be open to scrutiny.

But he would not answer questions on whether action will be taken against Caruana, on whose instructions the direct order was awarded to Bogdanovic for three months’ work on the national sports curriculum, for which he possesses no evident qualifications, for a total cost of €15,000.

The Shift asked the prime minister whether he would be taking action against Caruana as he did in the case involving Parliamentary Secretary Rosianne Cutajar who was asked to resign until an ongoing investigation by the Standards Commissioner is concluded. The Office of the Prime Minister did not reply.

Neither did the prime minister comment on the fact that Bogdanovic still forms part of the education minister’s private secretariat – a fact Justyne Caruana denied despite the evidence when revealed by The Shift.

Minister Caruana is already facing two separate calls for an investigation by the Standards Commissioner concerning abuse of power and breach of the ministerial code of ethics.

Independent MEP candidate Arnold Cassola asked George Hyzler to investigate Caruana’s contract “to her boyfriend”, while a second call was sent to the Standards Commissioner from an unnamed close acquaintance of the player. The Gozo Football Association confirmed that Minister Caruana was recently issued with a special pass to be able to enter the stadium and watch Ghajnsielem FC matches – Bogdanovic is the coach of the team.

The sports portfolio does not form part of the Minister’s responsibilities, and Caruana got the special pass even though fans have been prohibited from attending matches since the start of the pandemic.

The Shift is informed that on 10 March, when Robert Abela was announcing the new COVID partial lockdown including the closure of schools, the Education Minister was on the stadium stands in Gozo watching a match between Ghajnsielem FC and Victoria Hotspurs.

Confirming that the minister had personally asked to be allowed inside the stadium for the game, a spokesman for the Gozo Football Association said that she was issued with a special pass following permission granted by the Malta Football Association.

Only a year ago, Minister Caruana was already forced to resign by the prime minister after revelations that her husband, Silvio Valletta, at the time Deputy Police Commissioner, travelled with murder suspect Yorgen Fenech to watch international football matches. Since then, Minister Caruana and Valletta have separated.