An application for a block of 15 flats that sits within the “scheduled setting” of an old windmill afforded the highest protection has been recommended for approval by the same Planning Authority officer who had presided over an earlier application riddled with irregularities in an earlier run for the same permit.

The irregularities in the first run led to a permit that was granted last June to be summarily revoked by the Environment and Planning Review Tribunal. The fresh application is now scheduled on the agenda of the Planning Commission tomorrow.

But last Friday the lawyer and consulting architect of the windmill’s proprietors urgently wrote to the Planning Authority with a series of claims of further irregularities. These include false declaration of ownership by the applicant, other “grossly inaccurate and misleading” information, and “statements that are made in the report that are grossly manipulated and factually incorrect.”

The development in Gozo is proposed by a developer in his mid-30s, Shaun Sultana, who according to sources appeared on the developers’ circuit out of nowhere two and a half years ago, and has since put in at least eight applications for developments, the largest of which is a block of 25 flats.

Sultana, who had no known previous association with the construction industry, is reportedly a photographer who has a small photography shop in Victoria.

He originally applied for the latest development – 15 flats, two pools, and garages – last February. The report by the case officer bears the date of 27 May 2020 – the same day when the Planning Authority published more stringent control policies on developments that fall within the “scheduled setting” of heritage buildings, extending in a radius of 50 metres around the building. The development in question lies 38 metres away from Ta’ Bwier Windmill built in 1858. 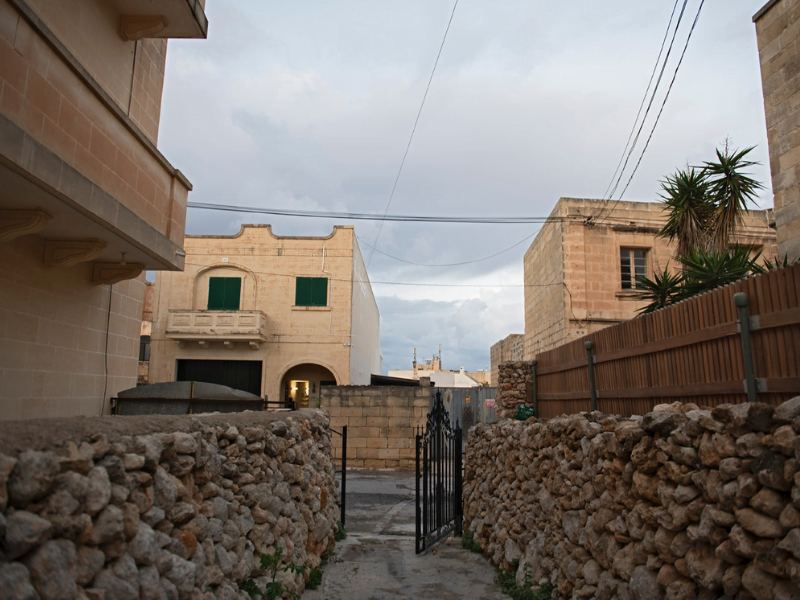 The five-storey block of flats would dominate the view from the windmill across the street.

The applicant applied under a so-called summary procedure – an expedited permit-granting process designed for run-of-the-mill applications for which consultations are more limited and which are decided by the Planning Directorate internally without going to a public hearing in front of the Planning Commission.

Planning sources said that developments of this type at such a sensitive site within the protected setting of a heritage building, as well as demolition, are not supposed to be processed under summary procedure. Moreover, the ‘site notice’ was nailed to the wrong site, and it was removed shortly after affixation, making it difficult for anyone to file a proper objection.

In last Friday’s letter to the Planning Authority, the windmill proprietors’ architect, Joanna Spiteri Staines, who is active within the NGO Din L-Art Helwa, described the earlier acceptance of the summary procedure as “incomprehensible”.

After the permit was granted, the family that owns the windmill appealed and the tribunal immediately revoked the permit.

The owners also wrote to the Ombudsman calling for an investigation.

The application scheduled for tomorrow’s hearing is a largely a recycled version of the earlier application that was revoked. Despite the letter to the Ombudsman and the tribunal’s repudiation of the earlier procedure, the new proposal was also assigned to the same case officer, Jonathan Attard, and the same endorsing officer, Mark Cini.

Although the application this time round has been processed under the full procedure, the recommendation for approval sits oddly with the new planning policy of 27 May 2020.

This policy that seeks to restrict height and type of buildings within the setting of historic buildings had been much publicised upon launch – the Planning Authority even funded sponsored articles in The Times of Malta using the picture of a windmill – although planning sources have told The Shift that the policy has not been as stringently applied as envisaged. The policy states that for scheduled properties the “the context/setting is deemed to be highly significant, which includes both the building and its surroundings.”

Significantly, the policy elevates the say of the Superintendence for Cultural Heritage. In this case, the superintendence specified to the Planning Authority that “the façade is to be limited to two-storeys.” It also requested a “revised proposal” as well as a photographic assessment so that it could offer updated advice.

This is in keeping with the policy requirement of “photomontages from strategic viewpoints” to enable the Planning Authority “to assess visual implications and impacts on the scheduled building.” Yet the photomontages presented by the architect, in this case, are limited and taken from angles that do not show the five-storey building in its wider setting.

Planning sources have told The Shift that this narrow interpretation of visual impact sits oddly with the policy, which states that the “extended context must be taken into consideration especially (but not exclusively) where developments which are larger in terms of height, volume and density than the scale of buildings in the vicinity, are proposed.”

The Book of Judges by the book