As the Commissioner for Standards in Public Life called out ministers for promoting their official ministerial work on their personal social media pages, Economy Minister Silvio Schembri has an ongoing Facebook advert promoting a video on his page of a professionally produced video with the Ministry’s logo.

On 8 May, barely a day after the Commissioner’s findings, Schembri published a live feed from his personal Facebook page of a press conference on COVID-19 Economic Support Measures together with Kurt Farrugia. The official Department of Information Facebook page then duly shared the post. Just under one day after the Commissioner for Standards in Public Life issued a report condemning the use of personal Facebook pages for official statements, press conferences and videos, Schembri published a live press conference as Minister. The post with the live feed was then shared by the Department of Information.

Commissioner George Hyzler released a report this week on the use of social media by Cabinet members where he stated that the lines between their roles as Party officials and government ministers should be kept separate and transparent.

“A video in which a minister speaks in his or her official capacity should be published through an official channel. Once it has been published officially it can be shared via the minister’s personal social media channels, but the latter should not be the primary avenue through which the video is published,” he said.

On the day the report was published, Schembri also launched a Facebook advert (below) with the words “Malta is the best country in the world”, promoting his portfolio amid efforts to fight COVID-19. The video appears to have been first published on the Malta Enterprise Facebook page, a page with a fraction of Schembri’s heavily promoted page’s “followers”.

A new advert created by Silvio Schembri on 8 May, which is still running.

Even before the publication of this report, the Public Standards Commissioner held a meeting with Labour Party whip Glenn Bedingfield and Governance Minister Edward Zammit Lewis on 3 April where he presented a set of guidelines on the use of social media.

“These guidelines, which are discussed later on this report, were subsequently agreed to by the government,” the report states. Yet, government ministers continued to place adverts on social media.

The Opposition has reacted strongly, calling for an investigation into the abuse and demanding that ministers return public funds used to push forward their own agenda.

Taxpayers money being used to promote the personal pages of Labour Ministers. Daylight robbery. Pay back the money to the people NOW! #RobbedAgain ??https://t.co/4FWoQ6yWXN

According to the agreed guidelines, personal social media channels should not give the impression that these are official and “under no circumstance” should benefit from public funds and resources, whether directly or indirectly, even for content dealing with official activities.

When he was asked this week about the use of public funds to promote his Facebook page, Schembri denied it. “I would have no problem refunding public funds spent on Facebook boosts because I haven’t spent a cent of public funds,” he said at a press conference.

Also, government or other official symbols and identifiers cannot be used. Summary of guidelines on the use of social media. Source: Case report

The report points out that several ministers and parliamentary secretaries failed to properly distinguish between the official and personal spheres in the use of their personal social media channels.

It was common practice for ministers and parliamentary secretaries to publish content that
appeared to have been created specifically for their personal social media channels using official resources.

“In this way, they are using public resources to raise their own personal and political profiles. This represents a misuse of public resources and a blurring of their roles as members of the Executive and as politicians. This practice should be discontinued,” he said.

Schembri’s social media account was one out of the five random samples taken by Hyzler for his report, which also looked into the posts of Environment Minister Aaron Farrugia, Finance Minister Edward Scicluna, Transport Minister Ian Borg and Education Minister Owen Bonnici.

“There may well be other, possibly worse offenders since the practice is widespread and of long standing,” Hzyler said.

“My general observation on the basis of this random sampling of social media use by ministers is that, while examples of good practice exist, bad practices and misuse of resources are widespread,” he added.

Former Minister Konrad Mizzi was one of the ministers who used social media advertising extensively, as he was hit by one scandal after another since the Panama Papers exposé,, including the Electrogas and hospitals deals. 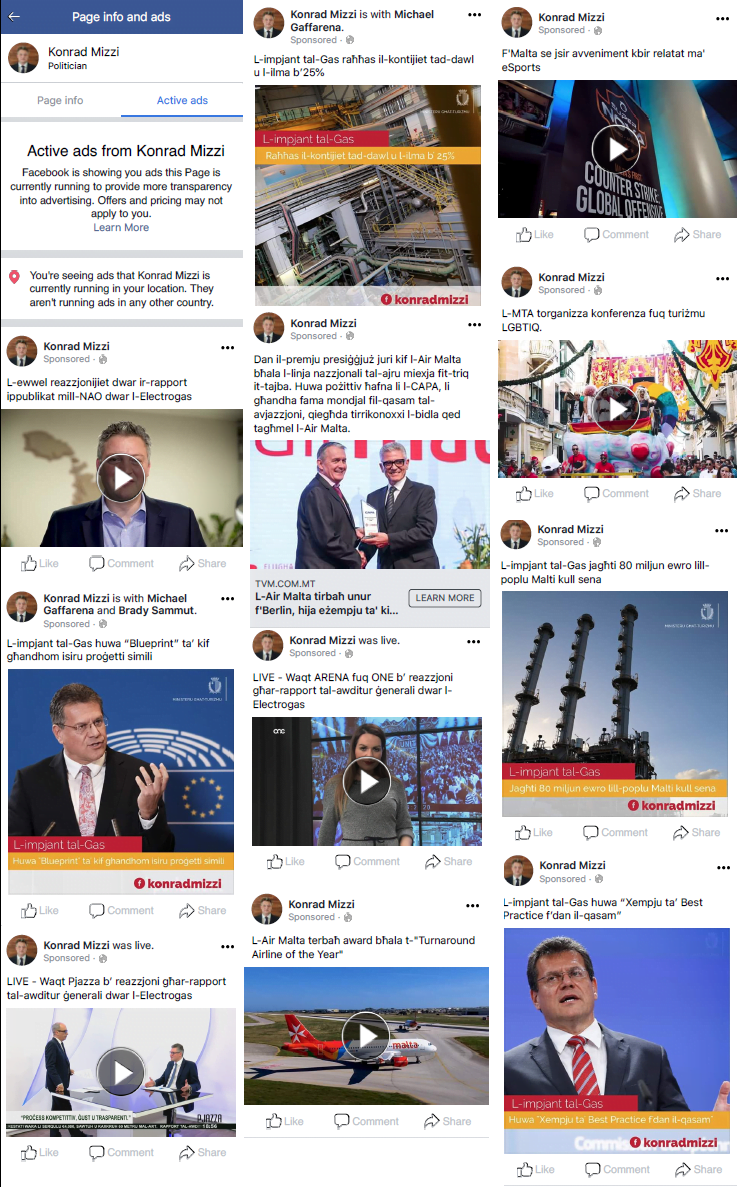 The Facebook page of Transport Minister Ian Borg, for example, had a video about the inauguration of social housing with official logos of the Grand Harbour Regeneration Corporation and his ministry, while Farrugia’s page had a graphic that included the official logo of the Environment Ministry.

“Social media use by ministers and parliamentary secretaries represents an area of serious concern on ethical grounds,” Hyzler said.

Videos or posts uploaded on the minister’s personal Facebook page should not feature the ministry’s logo, whether or not this is added on initial publication or when it is shared.

“The addition of a logo goes beyond sharing official content: it implies the appropriation of that content for personal ends. It is difficult to escape the conclusion that the production of videos in this manner is a thinly disguised means for a minister to promote himself and to raise his political profile at public expense,” he said.

Bonnici was the only one mentioned by Hyzler as an example of good use of social media where a clear distinction between his role as a Labour Party constituent and a minister is kept.

“I never produce any content for my personal Facebook account via public resources, all resources produced via public funds are directly related to my portfolio and are published on ministry social media. Once the content is published, then I share/retweet on my public accounts,” Bonnici wrote to Hyzler. Owen Bonnici’s ‘Love Actually‘ promo video published on 1 May, 2020 does not feature any logos.

He was the only minister, together with Scicluna, to reply to Hyzler’s requests for information while he was compiling the report. Scicluna said all costs including boosts and advertising “have always been paid from my own personal budget”.

Scicluna also pointed out that his videos were shared after they had been uploaded on the ministry’s official site. Yet Hyzler called this out, saying it was “incorrect”.

“On the contrary, the ministry in effect shared through its official website a video published on Minister Scicluna’s personal YouTube channel. This, together with the fact that the video was produced using public funds, represents the complete erasure of the distinction between official and private spheres”.

Read the report in full here.