Victims of the construction industry carried the protest banner as citizens gathered to demand reforms after Miriam Pace's death.

Those who lost their homes as a result of overzealous development encouraged by lax regulations and enforcement took centre stage at the protest organised by Moviment Graffitti on Saturday, addressing the crowd that gathered in St Venera following the death of Miriam Pace this week.

Filled with rage, Caroline Micallef, Paul Vella and Anthea Brincat shared their experiences, explaining the trauma that hits families who fall victim to the excesses of others. They all said their demands fell on deaf ears, leading to the death of Miriam Pace, 54, wife and mother of two, when she was crushed beneath the rubble of her home that collapsed due to construction work nearby.

“I lost my home to developers’ shoddy work. I did not deserve this. This is the result,” Micallef told the crowd holding up pictures of her home, saying they had escaped death because they had left the house just before it collapsed. “These pictures speak for themselves. You almost killed us!”

Vella said his family has been in court for 20 years and had still seen no justice, listing those involved in the development process including architects and lawyers all shifting responsibility: “In these 20 years, we have learnt nothing. All the ‘reforms’ were for nothing… the laws are not there to protect the people.”

Brincat said that following the trauma her family faced, her father lost his leg. “There are repercussions to all this. It continues to affect you physically and mentally. The trauma we faced led to my father losing his leg because of his health.”

Addressing her father who was one of those leading the protest in a wheelchair, she said with tears in her eyes. “I want to tell you here, dad, just how much I admire your courage.” They all listed the same culprits. Apart from MDA’s Chetcuti, those repeatedly mentioned by the victims included the Head of the Building Regulations Office Michael Ferry and government consultant Robert Musumeci who is responsible for shaping laws that led to the current crisis, which he continues to defend.

Moviment Graffiti said residents and citizens were being held hostage by a group of developers who considered themselves above the law with total control over politics, its players and the same authorities that should be administering it.

“We need to understand that we are slaves to a system that prioritises profit and kills us in our own homes,” said Wayne Flask, one of the organisation’s representatives. “This is no accident, but the result of this system… we deserve better than this.”

Andre Callus listed recommendations that must be implemented with urgency: “One accident follows another, and every single time they wear a mask of sorrow, appearing on TV saying ‘this can’t continue to happen’. They refer to ‘cowboys’ and ‘a few bad apples’ – the same story, once, twice, a third and fourth time, and yet nothing changes because those who wear this mask are the same people who block reform, working in the shadows to ensure nothing changes. Hypocrites and murderers, that’s what you are.” 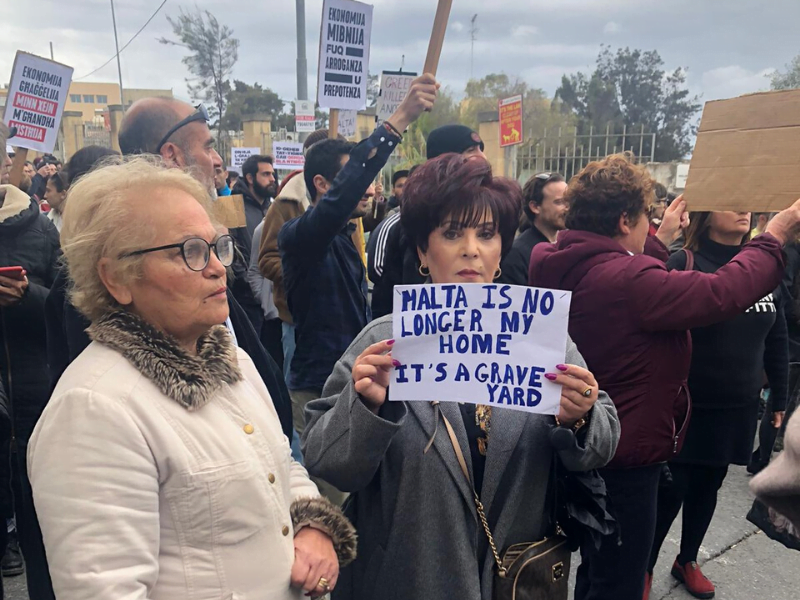 The recommendations put forward by the organisation included relieving residents of their financial and logistical burdens, providing workers with their rights and safety, introducing the licensing of contractors and developers, as well as the introduction of a points and blacklisting system. The end of ties with political parties was repeatedly referred to as a priority.

The construction lobby was constantly interfering with needed reform in the sector, guided by profit, not decency. The lack of enforcement, inadequate laws, complete laissez-faire in planning, lack of safety in construction sites and the “arrogant bullying attitude of this lobby are the result of years and years of donations and pressure on the world of politics,” Moviment Graffitti said.

This is the latest in a series of building collapses in the span of a year that took place in Ħamrun, Mellieħa, Gwardamangia, St Paul’s Bay and Msida. Moviment Graffitti said Pace’s death was a direct result of this situation.

The organisation rubbished the legal notice drafted by Musumeci following similar incidents, saying it was the product of incompetence and servility towards the construction lobby.

“As we have repeatedly said, accidents like this were going to continue because this reform did not tackle, in any manner, the structural problems within the system,” they said.