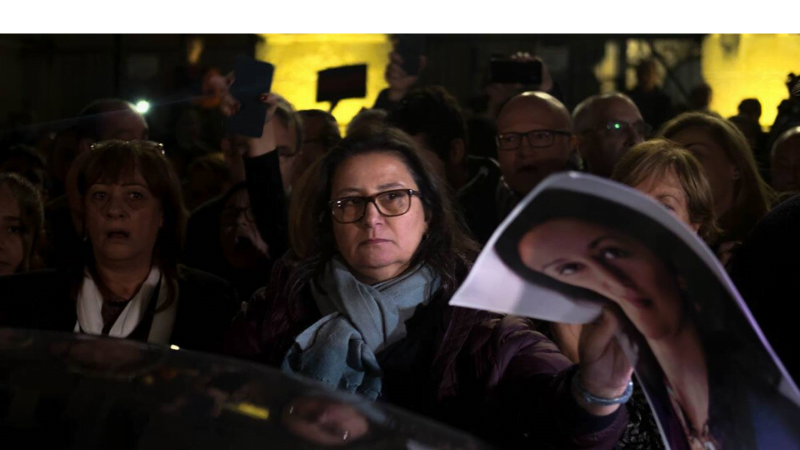 Owen Bonnici had a bad night.

Why would he exit parliament by the front door — right into the middle of a peaceful protest — when he could have slipped out the back like the rest did?

After all, Bonnici wasn’t the main focus of the protestor’s rage — at least, not in the serene depths of what passes for his tainted conscience. No, he’s just one of the protectors. He makes excuses for the crimes of his Cabinet colleagues, but as far as we know, he doesn’t commit them.

Or was his highly visible exit a deliberate provocation? Was he hoping to incite something that could be described as violence in order to clamp down on the rapidly growing protest movement?

Former police officer and current Speaker of the House of Parliament, Anglu Farrugia, is already saying the actions of protestors were irresponsible and could constitute a breach in the Ordinance that regulates the privileges and powers of the House of Representatives (Cap113).

A police officer, Inspector Priscilla Caruana Lee, was unfortunately injured in the line of duty when Bonnici’s car drove over her foot as the Justice Minister tried to make his highly visible exit.

The incident was captured on video. You can see a protestor trying to help the Inspector out of the way as the officers next to her slam on the hood of the car to make it stop. This was clearly not intentional, and not the fault of protestors.

Bonnici made a show of comforting the injured officer the next day, telling citizens not to politicize the incident even as he went about politicizing the incident.

But Minister Bonnici’s version of events doesn’t match what the rest of us saw on video. He posted his version on Facebook this morning. Protestors “slamming my car, forcibly blocking it, the kicks and scratches, bashing its windows, the spitting and bad language, the chasing, angry faces and threats…”

It must have been quite a shock for Bonnici to have to sit there and listen to people’s insults rather than be whisked away by his minders. That’s not the sort of reception he gets at a Labour Party Sunday sermon.

But the Justice Minister mustn’t let fear cloud his judgement. Surely he isn’t afraid of noisy people shaking paper on sticks at him?

Anyone who watched videos of the event saw protestors venting their outrage with their voices, and with posters and painted slogans.

The police handled the situation perfectly. They cordoned off the Minister’s car and controlled the surging crowd, and they didn’t have to use force to do it, either. No one needs riot shields at a peaceful protest.

But Bonnici’s colleague, parliamentary secretary Aaron Farrugia, who was stuck in the car with him, had a different impression. “People have a right to protest,” he said, “but what I saw with my own eyes last night was violence on police and on government officials in the line of duty”.

No, Mr. Farrugia, getting yelled at isn’t violence. Being torn apart by a car bomb is violence.

As for Bonnici, his longwinded statement on Facebook was as out of touch as his Cabinet colleague’s sense of responsibility.

“The institutions are working,” he wrote, “and the facts show there is no impunity.”

The fact that Keith Schembri and Konrad Mizzi are still in government shows otherwise. And as Joseph Muscat said to a reporter yesterday in the wake of Yorgen Fenech’s arrest, “Facts speak louder than words.”

Bonnici doesn’t seem to understand that officials in a normal country step down for much less. But the Inner Circle isn’t interested in clearing their names so much as it is interested in controlling the questions that can be asked about them.

In his morning-after ‘shaken but not stirred’ Facebook post, Bonnici went on to write, “I stand behind Joseph Muscat who is an extraordinary, impeccable person who knows how to lead the country with extremely strong leadership”. But he probably should have stopped before adding “the Prime Minister created wealth and will continue to do so.”

That’s exactly what people are so pissed off about, Minister Bonnici. Despite the never-changing bank balance he declared to parliament, the Prime Minister sure seems to be creating wealth for himself and his friends.

Bonnici closed his Facebook post with, “Malta in our hearts.” But a different image comes to my mind. How about ‘Malta in Keith Schembri’s pocket’?

You’ve pushed this rotting fruit well past its sell by date, and you’ve pushed the people of Malta to their breaking point. It’s time for you to go.

The people of Malta have tolerated astonishing levels of corruption.

They’ve tolerated the abuse of those who are openly fleecing them, and who respond to their questions with arrogance.

They’ve tolerated the rape of their land, the paving over of their history, the destruction of their open spaces, and the sliming of their beaches so ‘friends of friends’ can make a little more money selling fish.

They’ve watched government ministers and ‘persons of trust’ profess their innocence with fake outrage and crocodile tears, even as they go through contortions to avoid the court dates that they claim will clear their names.

Today I was again prepared to testify and expose all the lies maliciously spread by @SimonBusuttil, but his repeated maneuvers led the Court to order that my testimony be postponed to a later date. Why doesn’t Busuttil want me to testify?

Keith Schembri said, “I look forward to clearing my name in court […] Why doesn’t Busuttil want me to testify?” But when he was finally forced to take the witness stand, brave and innocent, beleaguered Keith Schembri shut his mouth and ran away.

Poor Chris Cardona took his mobile phone records and ran away, too.

Konrad Mizzi dropped his case against Simon Busuttil so Karl Cini wouldn’t be questioned in court about Mizzi’s relationship with Yorgen Fenech’s 17 Black.

And the Three Vitals Ministers have been playing a desperate game of hide and seek for months. “Nothing to see here!” they shout, and out trots Slow Eddie Scicluna, who shrugs and says, ‘Money laundering happens everywhere’. But the only thing these guys are hiding is their arse from a witness stand.

Honest citizens lost heart when Joseph Muscat won the last election with an even bigger majority, despite clearly documented proof of the corruption that his colleagues were already wallowing in.

Honest citizens got scared when the country’s most vocal investigative journalist was brutally murdered in broad daylight with a massive car bomb. Many of those who had spoken out put their heads down and went silent. If Daphne could be killed for what she wrote, then what could happen to them?

They watched as organized social media hate groups associated with the Prime Minister’s governing Labour Party openly targeted critics of his regime. And they watched as people in and connected to this government got away with it again and again.

But something changed last night.

Muscat’s refusal to fire his Chief of Staff after the arrest of 17 Black owner Yorgen Fenech flipped a switch.

The line that ‘this is proof the institutions are working’ has worn thin in the Land of The Endless Inquiry.

There was a new level of anger in those cries of “Barra!” and “Mafia!” and “Assassin!”

We’re finally seeing the Malta that stood up to Nazi Germany. The strong, determined, unbreakable Malta that won the George Cross and the respect of the free world.

You’ve pushed them past their breaking point, and the people have had enough.

It’s time for Joseph Muscat and his friends to go.

Civil society organisations are calling citizens to join them for another protest in front of the Auberge de Castille on Friday 22 November at 18:30 to demand the resignation of Prime Minister Joseph Muscat.