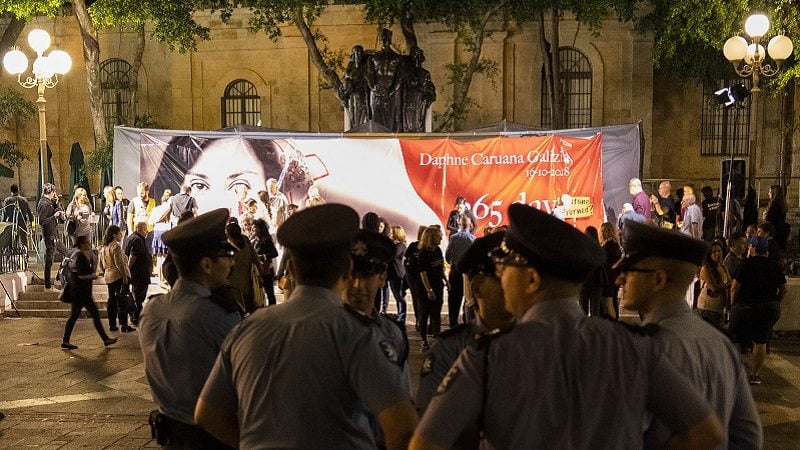 Police look on during preparations for a 'Truth and Justice' protest in Valletta on the one-year anniversary of Daphne Caruana Galizia's assassination. Photo: Pierre Ellul.

Disinformation Watch #30: Corruption is no ‘perception’

Malta has seen the sharpest decline in its Corruption Perceptions Index (CPI) score since 2015, after Mozambique.

Malta’s score went from 60 in 2015 to 54 in 2018, putting it below the European average of 66. Malta, now at its lowest ever global ranking, is one point above Namibia in sub-Saharan Africa and one point below Saint Lucia in the Caribbean.

The index, which ranks 180 countries and territories by their perceived levels of public sector corruption according to experts and businesspeople, uses a scale of 0 to 100, where 0 is highly corrupt and 100 is very clean. The index also refers to scandals involving government officials and the Panama Papers, the political interference and the mishandling of alleged two laundromat banks, Pilatus and SATA, as well as its cash-for-passports scheme.

Reporting in December 2018, the Council of Europe’s Venice Commission found that Malta lacks the separation of powers and institutional independence to control corruption.

Countries that experienced a statistically significant change in their scores

“This is the critical area that the government of Malta needs to address to reverse the negative trend, rule of law at all levels,” Transparency International’s advisor for Western Europe, Nacho Espinosa, said.

Labour MP Robert Abela said that Malta’s worst performance in the CPI to date was down to anti-corruption campaigning by former Nationalist Party leader Simon Busuttil.

In reference to Busuttil, Abela said the decline was down to the “rise in political candidates running on a populist platform who seek to undermine democratic institutions and push anti-democratic agendas,” adding “this is why I appeal to Busuttil to stop harming our country.”

Abela’s comments, blaming anti-corruption and democracy campaigners for the corruption and democratic crisis, bring to mind the official slogan of The Party inscribed on the Ministry of Truth building in George Orwell’s 1984: “War is peace. Freedom is slavery. Ignorance is strength.”

Prime Minister Joseph Muscat said in the third person and in reaction to Malta’s CPI score that “without a doubt there are many other reports on [this issue], from independent authorities. And what has emerged from these reports? It’s not what Joseph Muscat says – court after court is deciding that [corruption] claims are merely allegations”.

Muscat has overseen Malta’s worst performance not just in the CPI, but in the World Bank’s rule of law and control of corruption indices, and in the Economist’s Democracy Index.

A cross-party delegation of MEPs has twice reported on Malta’s deteriorating corruption and rule of law under Muscat. His response was to say that MEPs investigating the rule of law did not understand how things work in Malta.

Abela’s comments, blaming anti-corruption and democracy campaigners for the corruption and democratic crisis, bring to mind the official slogan of The Party inscribed on the Ministry of Truth building in George Orwell’s 1984: “War is peace. Freedom is slavery. Ignorance is strength.”

While government and Labour officials either deride the CPI result, as Muscat did, or blame it on the Opposition, as Abela did, they have unleashed their army on social to attack the integrity of the NGO and the CPI.

As represented by former Labour official Ethelbert Schembri, active in many of Labour’s once-secret Facebook hate groups, the line was that the Index is just a “perception index.”

Their implication is that “vociferous and deluded individuals” are damaging the perception of Malta with their anti-corruption campaigning.

They brand anti-corruption campaigning as “mud-slinging,” the foreign media as “consorts” of Maltese activists, and those activists as “Malta haters” or “traitors”. Transparency International’s Director, Carl Dolan, noted that these rankings are not the result of surveys but based on the views of experts in the field, including experts in international institutions, top business executives, and persons who are an authority on matters like the independence of the judiciary as well as other objective indices.

Other trolls, echoing statements by Alfred Sant, among others, used whataboutism to refer to corruption scandals in other countries like the Volkswagen emissions scandal in Germany. Notably, the scandals they reference are private sector corruption scandals.

Malta’s corruption crisis is clearly located at the heart of its government. As also pointed out by Dolan, it is not the mere existence of scandals which impact ratings but the inaction by the government.

Corruption is nightmarishly difficult to prove to standards required to lead to jail time, but when a government faced with scandals makes no effort to bring those involved to justice (worse, comes across as protecting them), corruption is often the only reasonable explanation.

Muscat was well aware of this in 2009, when he was still in Opposition:

(“corruption and accountability scandals are not acceptable in a modern European country”).

During a political event at Hamrun in March 2012, he had said corruption was “an unjust tax”, and that Maltese businesses and families were being robbed. Then, in February 2014, he said he wanted to put behind bars those who had “fattened their pockets” as a result of corruption.

It does not take a genius to understand what changed in the intervening years.