The agreement signed between Steward Healthcare and Vitals Global Healthcare (VGH) being revealed for the first time includes details of the payoff arrangements as part of the sale of VGH to Steward Healthcare, including a company in Dubai that received €1.4 million.

Although the sale price for all the shares in VGH was set at €1, the agreement shows that a number of debts needed to be taken over and paid by Steward.

The Shift News has acquired a copy of the Share Transfer Agreement that was kept hidden from the public thanks to the government protecting the deal as a “private” one despite the millions being forked out by taxpayers to sustain yet another shady deal negotiated by Minister Konrad Mizzi in which taxpayers are again the losers. The agreement refers to existing “encumbrances” (rights over shares such as option agreements) which needed to be lifted through the payment of compensation, or similar, including to a previously secret investor called Samuel Luft, Dubai construction company Sharpoorji Pallonji Mideast LLC and to Dr Ashok Rattehalli.

Rattehalli had in fact sued Bluestone (the ‘owner’ of the concession on paper) last year to enforce his option agreement. He was given some 5% of the shares in VGH after the sale to Steward, after an intervention from Castille to ensure the sale went through.

The agreement also refers to a number of related party liabilities which would need to be paid by Steward or VGH as part of the transfer arrangements.

By means of a letter dated 15 February last year, 14 days after the signing of the SPA, the ex-owners of Vitals and Steward agreed that the following were the related party liabilities: 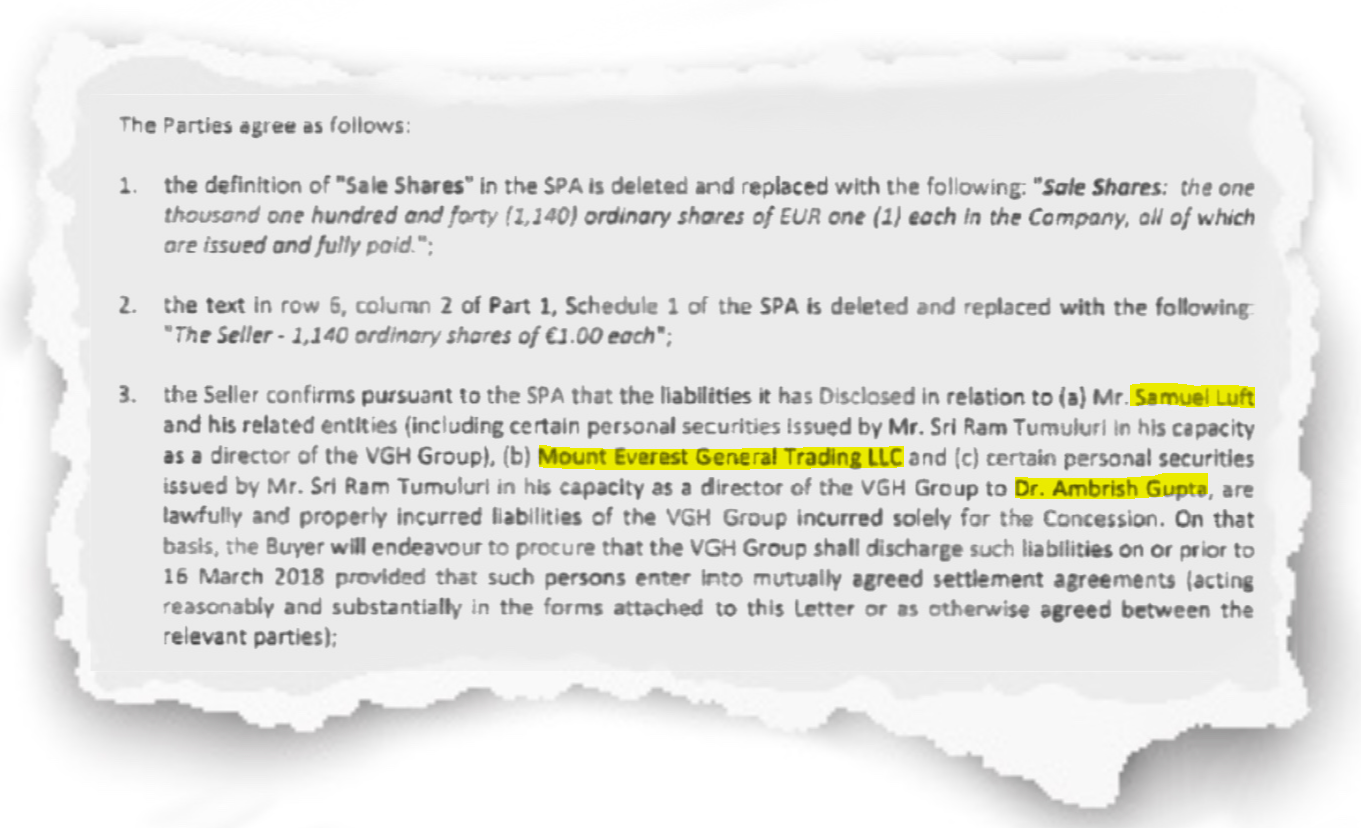 Excerpt from the settlement agreement with Sam Luft contemplating a $1.85m “termination fee”

The Shift News revealed earlier how the agreement transferring ownership of VGH to Steward showed how the government lied to the public on who the real owners of the deal were when transferring three of Malta’s public hospitals – St Luke’s hospital, Karin Grech hospital and Gozo hospital.

Late night meetings at Castille ensured the transfer went through even as one of the hidden investors panicked. Why the Prime Minister’s chief of staff present at those meetings took a particular interest in negotiations has remained unanswered. The Shift News had previously shown how Shaukat Ali owned one of the Jersey companies called Mount Everest Investments Ltd.

What is clear is that the government enabled a deal that saw their chosen concessionaire fronted by the controversial Sri Rum Tumuluri in a deal that sucked over €50 million from taxpayers’ money to deliver nothing, and leaving a reported €55 million debt.

Then the government also intervened to ensure the transfer to Steward Healthcare was made – for €1 – while others the public never knew existed received millions. And that’s not the end of the story. The Shift News will reveal how previously undisclosed intercompany agreements signed between VGH and the secret owners’ Jersey companies helped siphon off commissions and how the secret owners sought to remain in the picture even after the sale.

Why did the government put the public’s national healthcare at such risk to secure millions in revenue to unknown individuals? More in our next story…

Read the first in the series: Steward bought Vitals for €1, but millions changed hands