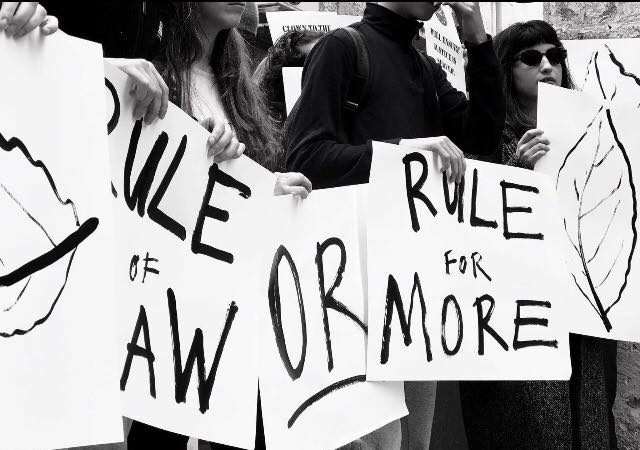 Back to Basics: What is the ‘rule of law’?

Perhaps the easiest way to explain the Rule of Law is to explain what happens when it is absent.

The opposite of the Rule of Law is the ‘Rule of Man’ – that is a system where one person or a group has assumed absolute power and is above the law – a dictatorship, autocracy or all powerful King or Queen. Their word is law but it does not apply to them.

So for example, with the Rule of Man, a person or group has the power to wake up one morning and confiscate your house and give it to their cousin just because his cousin wanted your house.

Similarly, it could mean that a person or group can adopt a new law that makes it illegal for any individual to own or use a car; however, they and their friends may keep and drive their collection of luxurious cars. They might even reserve the power to send people (let’s call them ‘police’) to confiscate your car and then take it themselves, just because it is a rare vintage car.

If anyone has absolute power such as this with no checks and balances, human nature is such that the person or group will steadily slide into ‘bad’ behaviour, and do everything to hang on to that power.

Elections are no guarantee of democracy

The often repeated phrase, “power corrupts, absolute power corrupts absolutely” is not just an empty expression dating back to around 1770; it is a stark reminder of lessons learnt over the course of thousands of years of history.

No person, no matter how saintly or wise, can or should ever be trusted with absolute power over others. You do not need complex psychological experiments to prove this; just place your child in front of a jar of sweets. Tell him/her that the sweets belong to the neighbour’s children, but no one will check if any sweets are missing and there will be no punishment. Then leave the room. The jar will soon be empty, and the child will be bouncing off the walls with a massive sugar rush.

Deep down we are all that child.

Years of learning rules keep this in check because we instinctively know that there will be consequences for our actions. Yet, if you remove the threat of punishment or consequences, anyone will default to pilfering a sweet or two whether it is within hours, days or years. Maybe someone will even bump off that annoying neighbour.

Needless to say, others around you will suffer (or not live) – let’s call these human rights violations.

Now imagine that, in order to curb this absolute power, we were to add a new rule.

What would that person do once the date for the ‘election’ arrives? As we said before, that person will do their damnedest to hang onto power. Even if an election happens at all (if there is no ‘punishment’ for cancelling elections, why hold them after all. That’s what absolute power means), that person or group of persons will do their best to alter the result whether that means bribing people by handing out ‘sweets’, threatening people, or simply locking up whoever wants to contest the election. Absolute power corrupts absolutely.

An electoral democracy alone (i.e. a vote) does not solve this problem and more often than not the person or group with absolute power will simply default back to autocracy whether by cancelling elections or rigging them.

Take Putin’s Russia, Xi Jinpeng’s China, Erdogan’s Turkey or Aliyev’s Azerbaijan for example. Each country periodically holds elections purely to appease the international community and avoid the word “dictator,” yet the result is often known even before ballots are cast and the leader or leading party continues wielding absolute power.

These are called ‘illiberal democracies’. They hold elections but the elections are flawed and inevitably these countries have abysmal human rights records. If unchecked, it only gets worse. Citizens calling for the resignation of police commissioner Lawrence Cutajar in Valletta, Malta.

Instead of holding elections every five years or so, we are going to curb the King or Queen’s absolute power. People now get fundamental rights and if the King or Queen breaches these new rights there will be consequences for the ruler because the people will revolt.

The King or Queen cannot just confiscate property on a whim or arrest or execute people for no reason. People get to know laws in advance, maybe they even get to have a say in how they are drafted and laws are enforced equally for all. People even get the right to be judged, not by the King or Queen (who might not like your face that morning), but by people like you, your peers.

That pact (let’s call it a ‘constitution’), between the people and their rights on the one hand and the King or Queen on the other, is now more powerful than the King or Queen. There now are consequences for a sovereign’s bad behaviour because the people will revolt.

Which of the two has a better outcome for people? An election every five or so years but unchecked power in between, or adding proper checks on power throughout by ensuring that the Sovereign abides by the pact or constitution?

History shows time and time again that it is more likely for a true democracy to arise out of a country ruled by a Sovereign that is subject to and observes that pact than to impose an electoral democracy and allow the winner absolute power in between elections.

At its most basic level, the Rule of Law is the observance of that pact.

It is the fundamental belief that this pact should be upheld and that democracy must be defended and improved. Backing that belief is the implicit (or explicit) threat that the people will revolt and overthrow power.

Society has since developed concepts such as separation of powers and institutions such as courts, parliaments, law enforcement agencies (such as the police or the army) and public authorities all designed to strengthen and build on that pact, curb absolute power and act as checks and balances against future abuses of power. Essentially, to prevent an autocrat.

Countries now have laws not only in force but also passed by governments in between elections, all adding or varying rules governing what people may or may not do. The Rule of Law is what ensures that those laws do not undo those checks and balances.

It is the understanding that successive governments should strive to strengthen them and that the persons in government and their friends will be bound by and continue to observe those laws, just like everyone else.

Be wary of governments that undo those checks and balances whether explicitly – by weakening or disbanding institutions altogether through laws – or implicitly by placing ‘their own people’ (based on loyalty rather than competence) within institutions.

Be wary of people in government or their friends who deflect criticism, try to avoid scrutiny at law or breach the law outright. Be very afraid if the defence or deflection that they use, even implicitly, is that they have won an election and avoid punishment with impunity.

Everyone realises when an autocrat suddenly seizes power through an armed coup d’etat or when elections are abolished, but at what exact point will you realise that the checks and balances have been so eroded and people have been so bribed and divided that you are now living in an illiberal democracy?

Like frogs sittings in a pot of water slowly heating up on the stove, you will be boiled alive long before you realise, unless you step out and check the temperature.

The Rule of Law is the vigilance that we must keep and actively defend to stem absolute power. It is also the pact between each of us that if an autocrat refuses to heed our threats, then there are consequences, even if is just with a ballot.

No political will for public inquiry into journalist’s assassination