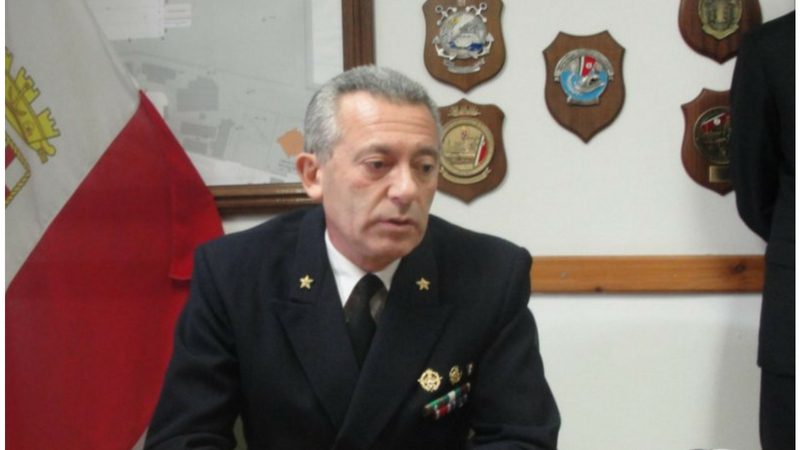 There is an unwritten rule embedded in the soul of each sailor – to aid all those who risk losing their lives at sea, General Commander of the Italian Corps of Port Authorities Giovanni Pettorino said this week.

Speaking during a ceremony to mark the 153rd anniversary of the Italian Coast Guard, Admiral Pettorino spoke about the obligations they had to respond to any call of SOS from people stranded at sea. He was constantly interrupted by rounds of applause from the hundreds of coast guards listening in, Italian news portal avvenire.it reported.

The article was shared on Twitter by Archbishop Charles Scicluna who, in a recent homily to mark the feast of Our Lady of Mount Carmel in Valletta, called on the Maltese to be compassionate to migrants.

Italian Transport Minister and Italian President of the Chamber of Deputies Roberto Fico were also present.

Pettorino referred to Salvatore Todaro, a legendary Sicilian commander who had sunk a Belgian military ship to then save the crew during World War II. Todaro had been described by a German military ally as the “Don Quixote” of the sea.

Pettorino said his answer was the same as what was said by Todaro: “We are sailors, Italian sailors with 2,000 years of civilisation behind us and that is what we do”.

The commander pointed out that, in recent years, the port authorities aided and saved hundreds of people at sea who were at risk in a vast area of the Mediterranean Sea.

This was a heavy and important commitment that has been carried out in the full awareness of the oath they all took. “Men and women do this every day so that others can continue to live,”he said.

Pettorino had always insisted that they would help those in need. “We have always acted to a call for help – we always did and always will. We do not only have a legal obligation but also a moral one”.

His words are in line with the Archbishop’s call for compassion in his homily. “It is beautiful when, as a country, we show solidarity with those out on the Mediterranean Sea while asking for solidarity from other countries. Everyone has to shoulder their responsibility,” the Archbishop said.

His appeal to Our Lady of Mount Carmel was to show solidarity but also to be helped. “If everyone helps out, then we can win this challenge”. It was not fair that Malta was left alone without any help, he also said.

Meanwhile, earlier this month, Italian newspaper il Sole 24 published an interview with an admiral of the Italian coast guard who wanted to remain anonymous. He spoke about the situation in Italy where the government has refused to take in migrants and said that so far, these have not been accompanied by decrees, which would explain the motivations behind it.

If Interior Minister Matteo Salvini’s announcement to place limits on foreign military ships on an international mission is done in writing, such as a decree, “there could be consequences on the naval missions of the many military ships present in the Mediterranean, such as training cruises, exercises, ‘peace-keeping’ missions and so on,” he said.

When asked to go into detail about the Libyan coast guard, the admiral said that it was not clear. “Which military or paramilitary organisation is referred to when we see photos of Libyan sailors or when Italy gives vessels to the Libyan coast guard?” he asked, questioning also whether these were neutral or used by human traffickers.

The Maltese government earlier this month impounded two migrant rescue vessels and refused to allow a plane run by a German NGO from taking part in a rescue mission.