Prime minister Abela bragged, “We are not afraid of public scrutiny – I want to be scrutinised continuously”.

That same day a Lovinmalta journalist asked him about his luxury yacht and taxes.  Abela lost it. “You should ask these questions to the person who gave you the question, a Lovin Malta shareholder and a PN strategist.”

I have a perfect horror of words that are not backed up by deeds, Theodore Roosevelt once said. In Abela’s Malta, Roosevelt would have been truly horrified.

Why did Abela resort to Joseph Muscat’s intimidating tactics with journalists? Personal attacks and false accusations against journalists is hardly what’s expected of the man claiming to have implemented “the majority of the recommendations of the Caruana Galizia inquiry”.  Abela not only doesn’t want scrutiny but doggedly conceals the facts.

What triggered Abela’s rage was a simple question.  Is it true he failed to declare “boats and properties” and failed to pay his taxes? If Abela had nothing to hide he must have the ammunition to shoot down all speculation.  He could easily publish his tax returns.  He could simply provide documentation regarding his luxury yacht.  But Abela doesn’t.  Instead, he hides the facts, fuming and lashing out at anybody daring to ask questions.

Humiliating journalists is hardly the mark of a man with a clear conscience. The prime minister’s behaviour is shameful and disgraceful.

What is more disgraceful is his secrecy. Abela completely ignored the journalist’s reference to “boats”.  Abela regularly uses a luxury yacht, an Azimut 50 Fly called Baloo III. Abela refuses to confirm whether he owns the yacht or whether he leases it. If registered in his name, the yacht should have been listed in his declaration of assets – it hasn’t.

He refused to answer how he paid for it or who he acquired it from. He ignored questions about why his yacht is moored at the VIP Area of Marina di Ragusa and not in one of Malta’s marinas.

These are legitimate questions. Not least because the 10 year-old yacht is estimated to cost some €300,000.  It costs more than €20,000 per year to maintain, including berthing fees.

It’s not just his yacht that is of public interest. His taxes are too.  For somebody who’s been so critical of David Thake’s failings and who has abusively ‘spoken’ directly to the Tax Commissioner about Bernard Grech’s taxes, his own secrecy stinks of rank hypocrisy.

As prime minister and party leader Abela should set the example.  Instead, he failed to submit his own asset declaration on time.  When eventually submitted, his declaration was worthless.  He didn’t even declare his yearly income.  He cynically stated “as per tax returns” but failed to attach relevant tax returns for scrutiny. Only media editors can request MPs’ tax returns and that is a laborious process.

Abela was the only MP who didn’t declare his earnings. When specifically asked to state Abela’s income, his spokesman arrogantly ignored the question.

On the same day he attacked the journalist, Abela was defending the Attorney General, decrying the ‘unjust’ attack on her. He appealed for ‘respect for the institutions’. He made no such appeal when civil service head Mario Cutajar savaged the Ombudsman or when Bedingfield ripped through the Standards Commissioner.

More ominous was Abela’s unwitting admission that he has inside information about the Darren Debono deal. He “absolutely categorically denied” that the deal would benefit Minister Carmelo Abela.  How does he know?  Did the Attorney General tell him? Did he abuse his power and contact her to demand all detailed information necessary to reach such a conclusion?

Abela is hiding far worse. Abela and his wife entered into a business deal with Gilbert Bonnici of Bonnici Brothers.  The Abelas bought a half share in an Iklin property which was subsequently demolished to make way for apartments and garages. The project made an estimated €1 million profit. When Abela was asked to clarify his involvement in the deal, no answers were forthcoming.

Bonnici brothers won several multimillion contracts and direct orders under Labour. In September 2020, Abela visited a Bonnici Brothers quarry to inaugurate €1.2 million in new machinery purchased through a Malta Enterprise Scheme.  Several large concrete structures were built on site without a permit.  The Planning Authority decided a permit was unnecessary. 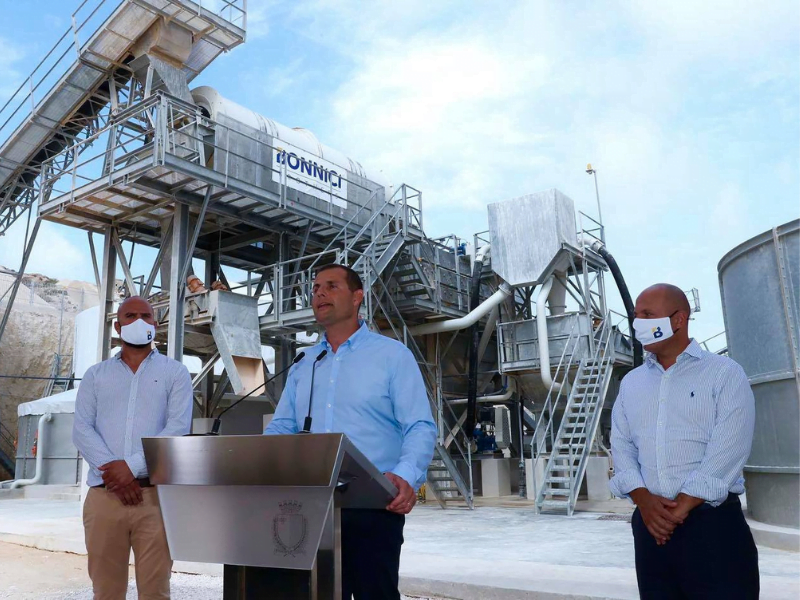 These legitimate questions must be answered by the prime minister, particularly when his business partner’s company is awarded millions. Despite his bluff about wanting to be scrutinised, Abela defiantly ignores questions.

The Caruana Galizia inquiry report concluded: “In the search for truth, openness and transparency are essential”. That is one part of the report Abela obstinately ignores. Abela falsely claimed Labour is “credible on good governance for having implemented most of the inquiry recommendations”. Abela’s claims about Labour’s credibility came on the day that his finance minister described Air Malta as a fireplace burning through millions of euro. As for implementing the recommendations, Abela is just bluffing.  None of the important recommendations have even been considered, let alone implemented.

The inquiry board recommended a law that fights financial crime through unexplained wealth orders, that even attempted hindrance of police work by public officials is made a crime, that association with criminal organisations, abuse of office and obstruction of justice become crimes. It recommended amendments to freedom of information legislation to prevent the administration from arbitrarily withholding information of public interest. “There is a culture of secrecy on the pretext of privacy or commercial sensitivity,” the inquiry concluded.

Robert Abela is the biggest champion of that culture of secrecy. He is the master of empty words. Paying lip service to accountability and scrutiny, he expends all resources to maintain the deep cover of secrecy.

As Abela dismally fails the basic test of democracy, his party mythologises his two years in office. The construction of a new personality cult is underway. As the continuity candidate, Abela seeks to complete what Joseph Muscat started – the demolition of democracy.

I am not sure who it was who said “ the truth hurts” but hats off to Kevin for yet again telling the truth and hopefully the Prime Minister will recognise that he cannot continue to fool all of the people all of the time.

Good for you Professor Kevin Cassar.