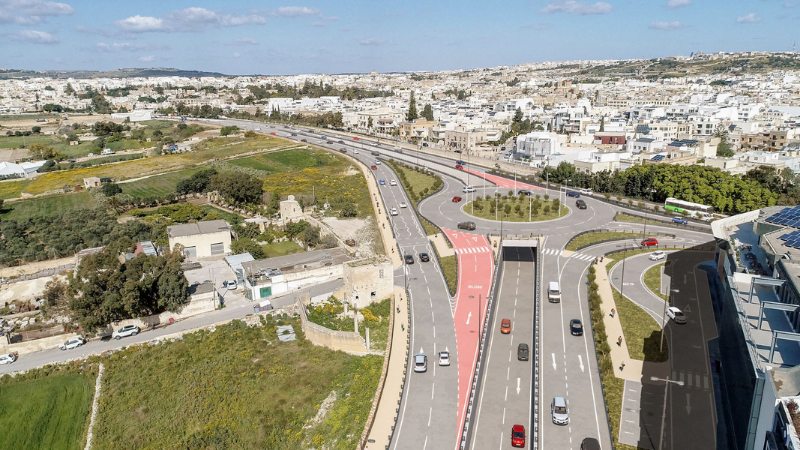 The underpass planned in Mriehel.

The 60-metre underpass, to be constructed beneath a roundabout near the MFSA headquarters in Mriehel, was not in the original plans approved by the Planning Authority in 2017, and nor was it included in the public tender, assigned to Link 2018 JV, for the multi- million euro project.

It is not yet officially known who will be doing the work on the new underpass, how much it will cost, or which contractor will be awarded the job.

Both Infrastructure Malta and Transport Minister Ian Borg remained tight-lipped on the financial and transparency implications of this recent decision.

Asked by The Shift to explain why the decision to construct a new underpass was not made at the beginning of the project, as well as to give a breakdown of the additional costs to be incurred, both the Minister and his roads agency did not reply.

They have also refused to explain whether a new tender has been issued and if not, whether a fresh direct order was given to the consortium already building the project.

Investigations by The Shift show that the new underpass did not form part of the original plans submitted to the PA by Infrastructure Malta after studies and designs costing tens of thousands were prepared by its commissioned experts.

Instead, a few weeks ago and just months from the original completion target date of the project, the government roads agency suddenly submitted fresh plans for the construction of an underpass. Digging has already commenced for the Mriehel underpass

The Planning Authority, as usually happens where it comes to government applications, was quick to grant its approval of the multi-million project as a ‘minor amendment application’ on 27 May.

The next day, digging commenced on the new underpass and Ian Borg announced the ‘new’ development, reported in mainstream media without question.

Apart from supposedly easing traffic as part of the overall project, the new underpass will also cost taxpayers millions more, which in turn mean the road contractors involved are set to pocket even more income and profits.

The Shift is informed that while no tender was issued, the three contractors in the consortium, V&C Construction owned by Charles and Vince Borg and Eurovision singer Christabel Camilleri, Schembri Barbros and Schembri Holdings known as Tad-Dobbu, have been given the go-ahead to start work on the new underpass.

Although no numbers have been released by Infrastructure Malta so far, a similar underpass in Santa Lucija, inaugurated last year, cost taxpayers some €20 million.

Tens of thousands of commuters have been suffering the chaos caused by almost two years of construction for the new road that will now be stretched further.

While according to Infrastructure Malta CEO Fredrick Azzopardi the project was planned to be completed and inaugurated this October, works are already behind schedule and the new decision to construct an underpass will delay the project’s deadline even further.

Infrastructure Malta has already acknowledged this in a statement, saying that the new underpass is expected to be completed by March 2022 – almost six months later than the expected target date of the project’s completion.

Incredible. Tax payers’ money at the mercy of the arrogant minister. SHAME ON YOU CORRUPT LOT under the name of workers’ party. You’ve only adhered to one promise, that given by the spouse of the most corrupt pm Malta ever had – make hay whilst the sun shines as both OF THEM and a few people of trust had made. This is another blow to white listing by the FATF.

Not even a proper road map from Mriehel to Rabat they could imagine.
The works progressed in a ” Lets see what we find and then see what to do.”
and when it rains?