The European Commission has said it expects the Mozura wind farm deal in Montenegro to be reviewed by independent and professional institutions in an investigation that may carry implications for those in Malta involved in the project.

Speaking to journalists in Montenegro, a candidate country to join the EU, a spokesperson for the Directorate-General for Neighbourhood and Enlargement Negotiations (DG NEAR) was critical of the Speaker’s refusal to allow a parliamentary debate on the project.

Speaker Ivan Brajovic last month rejected a motion to set up a parliamentary committee to investigate the Mozura wind farm and its links to Yorgen Fenech and 17 Black, following the publication of findings by Reuters, also published in The Times of Malta.

The Speaker had justified this decision on the grounds that the motion was only signed by 24 MPs when procedural rules state 27 signatures are required. Even though another five MPs endorsed the motion, Brajovic said it was too late, insisting it had to be signed and filed at least 24 hours before parliament’s next session.

Independent MP Srđan Milić, who filed the motion, argued that it was backed by all the Opposition MPs – 39 out of a total of 81. He also pointed out that the 24-hour deadline was frequently ignored when the government put forward its own proposals and initiatives. The Mozura windfarm project in Montenegro.

This development did not go unnoticed by the European Commission, which stressed “how important it is that democratically elected institutions discuss the said issues”.

The spokesperson pointed said the rule of law was one of the core values of the EU and a key element in Montenegro’s accession process to join the Union.

The Mozura scandal continues to hit the headlines in Montenegro. The whole project has been tainted with allegations of fraud and corruption from the start, involving politicians and shady businesses on both sides of the contract.

Intermediaries involved in the wind farm project in Montenegro told The Shift: “Those in government in Montenegro found the people of their kind in Malta who they could do business with and split the proceeds”.

Malta, through Enemalta, acted as a Trojan horse in the deal by taking over a concession that had collapsed over allegations of bribes and kickbacks and then handing over the plant to China.

Azerbaijani interests are also present in the multi-million euro deal through different companies owned by people who are close to President Ilham Aliyev, whose foundation disgraced former Prime Minister Joseph Muscat works for to promote “learning, tolerance, dialogue and understanding”. The web of companies involved in the Mozura wind farm deal.

The Opposition in Montenegro is united in the belief that the ultimate beneficial owner on the Montenegrin side is Milo Djukanovic who has been in power for 30 years, either as president or prime minister.

Djukanovic sealed the deal on the Montenegro wind farm with Muscat. Both won the dubious title of Corrupt Person of the Year by the Organised Crime and Reporting Project (OCCRP).

Dejan Mijovic of the United Reformed Action (URA) is cautiously optimistic that the European investigation will eventually knock on Djukanovic’s door. “We know that commissions for big projects end up at only one address – that of Milo Djukanovic,” said Mijovic during a press conference.

He hopes the investigation would yield results before the general election on 30 August. “That would be Europe’s greatest help to Montenegro,” he added. Such an investigation is likely to unearth further findings on those involved from Malta. 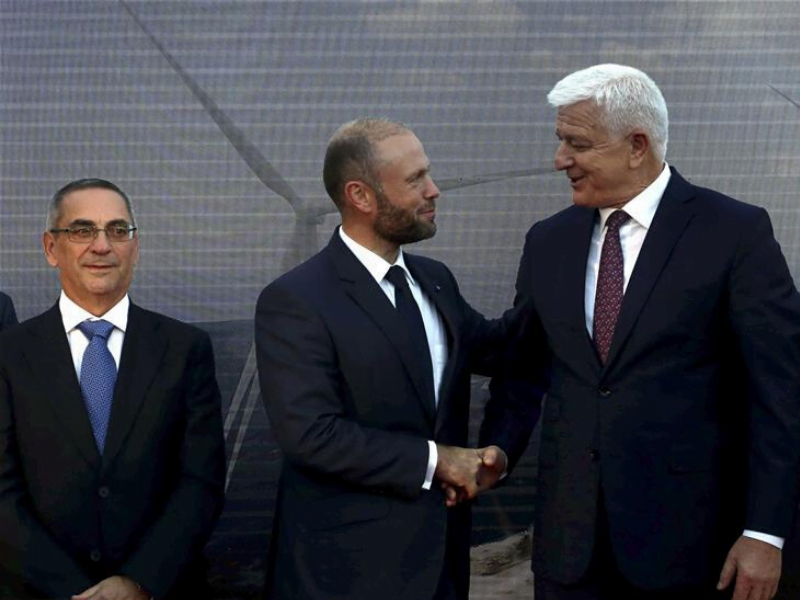 The Special Prosecution Office (SPO) did launch a probe on the Mozura deal in October 2017 – two days after Daphe Caruana Galizia’s assassination. Yet only the companies linked to the former Mozura concessionaire – Fersa Energias Renovables from Spain – is included in the investigation.

A recent SPO statement about the probe made no reference to the ongoing investigation into Caruana Galizia’s assassination in Malta and its links to 17 Black, or the new owners of the wind farm despite public calls from the Opposition for prosecutors to explain their “shameful silence about Mozura and Malta”.

An Opposition Leader in Montenegro’s parliament has challenged the government to publicly declare that it was not involved in any way in Caruana Galizia’s assassination considering these links. The journalist, assassinated by a car bomb on 16 October 2017, was the first to hint there was something wrong with the deal.

MP and President of Movement for Change (PzP) Nebojša Medojević called on the Prime Minister to clearly state the reason behind the frequent visits made by Muscat to Montenegro: “What were they so busy talking about just before the murder of Daphne Caruana Galizia?” The Shift could not confirm that meetings were held between Muscat and Djukanovic prior to the journalist’s assassination.

Nedjeljko Rudovic, an Opposition MP, told the Shift that he was not surprised by the actions of special prosecutor Milivoje Katnic: “The (earlier) Maltese government had to step down because of those (scandals) whereas the SPO here tells us that the probe is not finished yet after three years, let alone the indictment.”

“This scandal is another stain on Montenegro’s reputation – a country that is recognised around the world as a paradise for corruption and murky transactions,” he concluded. In Malta, the police have said they are investigating the Montenegro deal. Enemalta paid far more than it needed to for its share of the Mozura wind farm project, forking out €10.3 million of taxpayer money for the Mozura acquisition only two weeks after another company had purchased the shares for €3.5 million.

The amounts paid do not add up, and it is this gap that leads to strong suspicions that kickbacks were involved.

The Maltese State participated in a deal featuring three other States, all with a well-deserved reputation for systemic corruption right at the top: Montenegro, Azerbaijan and China.

The Shift’s investigation on the Montenegro wind farm deal was made possible through the support of journalismfund.eu