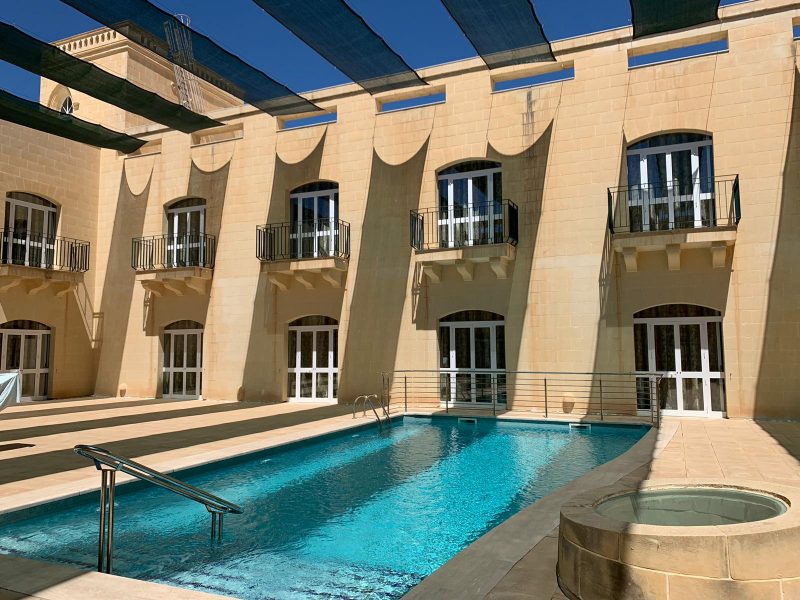 The pool at Lourdes home, Ghajnsielem

After refusing to disclose the contract with Downtown Hotel for the relocation of elderly patients from Gozo hospital’s St Anne’s residence, Gozo Minister Clint Camilleri said that he had not opted for Lourdes Home because it “remained under construction”.

This statement is contradicted by The Shift’s investigations that found the sprawling home has been accommodating occasional groups visiting on cultural tours on a full-board basis for about a year. Only some peripheral structures are currently under construction, and no heavy machinery is involved. The Shift is publishing pictures of the interior taken about a year ago. One of the rooms at Lourdes home in Gozo.

While replying to questions by Opposition MP Maria Deguara in parliament, who asked why the elderly had not yet been relocated to Lourdes Home, described as “ideal” by industry sources, the Minister said Downtown Hotel was just “a few metres down [the road from] the hospital”.

Downtown Hotel is in fact 1,200 metres away across Victoria.

The Minister also mentioned the lack of air-conditioners in Lourdes Home. Yet Downtown Hotel also needed alterations – a makeover and the installation of wiring – which held up the move by a few weeks.

Sources in elderly care have told The Shift of a new problem over logistics around visitation that has emerged since the government lifted restrictions on visitors to elderly homes two weeks ago.

A meeting point has been assigned for visitors and their elderly relatives to meet, but the source said that bedridden patients are unable to be shifted to the meeting point because stretchers or wheeled gurneys do not fit in Downtown’s lifts horizontally. A view of the corridor at Lourdes Home in Gozo.

Visitation is also barred for the elderly patients that have been kept at the hospital’s male and female wards.

“We don’t know what plans are in store for visitations or other things,” a member of the staff who spoke on condition of anonymity said. “The hospital has been silent due to media attention and controversy.”

At least 13 elderly former residents of St Anne’s have been placed in the male and female wards. These are among the more independent patients, and multiple sources have said that the intention had been to relocate these patients to Dar Amalia, an elderly home that opened in 2018 and has 23 beds.

These plans were eventually abandoned despite the risk of infection to the elderly being placed in the hospital’s “acute wards”. One of them picked up pneumonia at the male ward, the source said, which prompted her transfer to the female ward. One of the ensuite bathrooms at Lourdes Home.

The source also said that the staff was told that these patients would be moved back to St Anne’s Residence this week.

“But it’s Tuesday and it hasn’t happened,” the source said yesterday. “We are often kept guessing.”

The Gozo Minister’s refusal to table the contract with Downtown in parliament, citing “commercial sensitivity” echoes the stand taken in 2009 when then Gozo Minister, Giovanna Debono, similarly refused to divulge specifics on the relocation of government offices to Downtown “due to the commercial nature” of such details.

At the time, the Gozo Ministry leased an entire floor for offices of the Land and Public registries. The explanation that emerged over seven parliamentary questions by Labour MPs was that Downtown had been selected out of 12 submissions after a call for expressions of interest and that the ministry hadn’t issued a tender because the market price for “similar rentals” was not known. Debono had refused to disclose anything about the selection process, contract, or annual rent.

One of the hotel’s floors, which had been built as a shopping centre that never really took off, was then changed into offices. Details of the annual rent paid never emerged, although the talk among notaries is that it amounted to many tens of thousands annually.

The lease was eventually terminated after the change in government when Anton Refalo was the Minister.

The government has now leased the entire building with its 38 rooms, including common areas and cafeteria at a cost of €54.79 for every bed space, or €109.58 for most rooms – that is more than the room rates for hotel guests published on Tripadvisor. The contract, negotiated without going to tender, runs for a year according to sources.

In recent weeks parliamentary questions have been asked by the Opposition MPs Jason Azzopardi and Maria Deguara, who represent electoral districts in Malta. There has been muttering in Gozo on why Chris Said, the PN’s Gozo spokesperson, did not ask any parliamentary questions about the relocation of elderly patients to Downtown.

Contacted for comment, Said talked of the failure of Steward Healthcare to build a new hospital intended for completion by “June 2018” and the Gozo Ministry’s failure to finish an elderly home in Għajnsielem “after seven years”. He said he has repeatedly criticised the government on these failures, which led to decisions having to be taken in a drastic, hasty, and unplanned manner.

“The government is fully to blame for the situation the elderly are in,” he said.