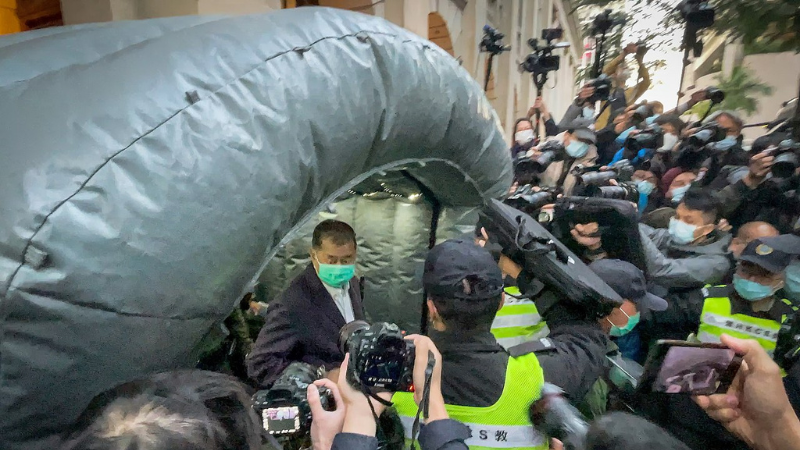 Jimmy Lai leaving the Court of Appeal in December 2020.

'Why does the UK government feel like it can’t say anything about Jimmy Lai?' - Matthew Caruana Galizia

An event in London this week focused on the plight of journalists killed or imprisoned, with a particular focus on Jimmy Lai imprisoned in Hong Kong, in which the son of assassinated Maltese journalist Daphne Caruana Galizia called out the UK on its lack of action.

“Why does the UK government feel like it can’t say anything about Jimmy Lai?” Caruana Galizia asked during the debate held at the Frontline Club in London on 12 January, organised by a law firm that has made a name for itself in supporting human rights cases, Doughty Street Chambers.

Lai is in prison in Hong Kong following his conviction on one of a string of spurious cases brought against him by the Hong Kong authorities.

He is the founder of Next Digital, which, until it was shuttered by the authorities, was Hong Kong’s leading independent media outlet, publishing the only major Chinese language newspaper which was not State-controlled and a thorn in the side of the increasingly pro-Beijing regime.

Caruana Galizia reminded the audience that his mother had faced similar threats and judicial abuse during her lifetime to those faced by Jimmy Lai, having been arrested at a pro-democracy demonstration aged 19 and then, when her journalism rattled the establishment, facing arson attacks and a slew of spurious lawsuits simply for speaking out.

Lai’s son, Sebastien, a British citizen, quoted the tribute made to his father by Common, the Academy Award-winning hip-hop artist, in 2015 when TIME magazine named Jimmy Lai as one of the world’s 100 most influential people:

“There are those who, when given the keys to wealth and the perks of the Establishment, choose not to rock the boat because of the backlash they might face. Jimmy Lai is not such a person.

Though he went from a child labourer in a garment factory to owning his clothing line and media company, he rejected complacency and the status quo when he chose to criticise a powerful government and support a primarily student-led democracy movement in his beloved Hong Kong.”

Sebastien urged governments, including the British government, not to accept the fiction being peddled by the Hong Kong authorities that the rule of law still applies in the Region.

Recalling his father’s own words, Sebastien reminded the audience that “The cheapest currency in an autocratic country is fear”.

The event at the Frontline Club was chaired by Julie Posseti, Global Director of Research at the International Centre for Journalists. She said, “Jimmy Lai’s case is emblematic of this broader deterioration of rights in Hong Kong and the crackdown on dissent, peaceful protest, freedom of expression and press freedom.”

Rebecca Vincent, Director of Operations and Campaigns, Reporters Without Borders (RSF), said noted the precipitous fall in Hong Kong’s ranking on RSF’s annual Press Freedom Index, from 18th place in 2002 to 148th place in 2022, indicative of the region’s slide into autocracy and the abandonment of the rule of law in favour of direct control from Beijing.

She called for immediate steps to reinstate conditions in which independent media can operate in Hong Kong.

Caoilfhionn Gallagher KC from Doughty Street Chambers described what was happening to Lai as ‘lawfare.’.

“The authorities have weaponised the law in multiple ways, all attempting to silence him, to cow him – for his journalism and pro-democracy work,” she said.

Gallagher concluded with Mr Lai’s own words when interviewed by the New York Times in 2019: “China’s leaders know that once they cow you, they can always cow you. Once they have you in their pocket, they will always squeeze you.”

She added, “but Mr Lai has certainly not been cowed. And he certainly is not in the authorities’ pocket. For that, he has been targeted for decades and now faces the rest of his life behind bars.”