Contrary to the home affairs ministry’s declaration that the head of operations at the Correctional Services Agency (CSA), Randolph Spiteri, was transferred to another department within the same ministry, information passed on to The Shift indicates Spiteri remains in place.

Home Affairs Minister Byron Camilleri had made the declaration about Spiteri’s removal from his post at Malta’s prison facility on 18 May. Camilleri had also claimed that a public call to find Spiteri’s replacement would be issued.

However, more than a month later, no such public calls can be found on the home affairs ministry’s website. In addition the government’s own database states Spiteri is still listed as head of operations at CSA. A screenshot from the home affairs ministry’s website showing the job opportunities section as of 27 June, 2022. 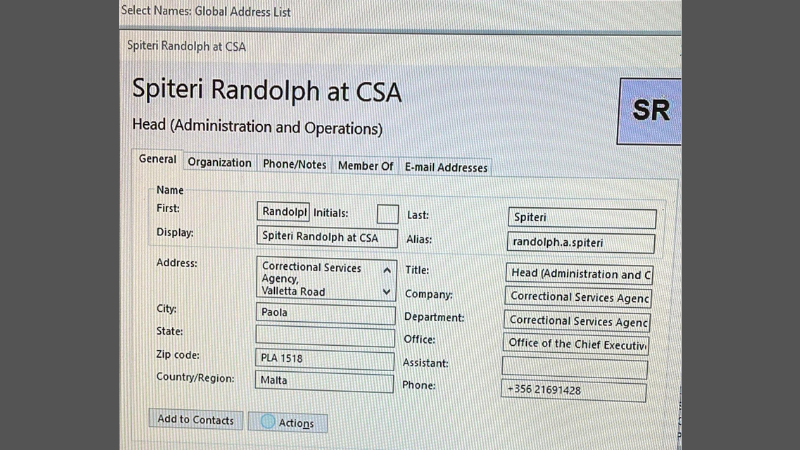 Spiteri’s role within the agency was flagged as a major issue following the self-suspension of CSA’s former Director-General Alex Dalli, who was removed following public backlash on the surging number of prisoner suicides under his tenure.

Besides being Dalli’s loyal second-in-command, meaning Spiteri enabled Dalli’s authoritarian and inhumane methods when the former director-general was still in charge, Spiteri’s name was also recently mentioned in court in relation to his alleged attempts at hushing up claims of sexual harassment at Transport Malta.

The husband of the alleged victim testified how he had received a WhatsApp call from Spiteri who not only knew details of a case which had been kept tightly under wraps but also urged him to settle the matter ‘amicably’ in spite of the victim’s allegations of consistent sexual harassment on the workplace.

A week after Camilleri’s declaration about Spiteri’s transfer, the home affairs minister refused to divulge further information about why Spiteri was removed from his post and where he was transferred to. Spiteri himself had denied the transfer, claiming he was out on long leave.

In comments given to Newsbook on 26 May, the director-general who was appointed in Dalli’s stead seemed to confirm Spiteri’s version of events, further contradicting the home affairs minister’s statement.

In November, the dean of the faculty of social well-being at the University of Malta, Andrew Azzopardi, welcomed the news of Dalli’s removal from the top post.

Nonetheless, Azzopardi had voiced serious concerns over the fact that Spiteri was still in charge of operations, arguing that the new director-general, former Red Cross head Robert Brincau, could not possibly change the systemic issues of the prison with the rest of Dalli’s team still in charge.

In fact, Azzopardi had, along with several other academics, activists and NGOs, called for the resignation of the entire administration which had protected and promoted Dalli’s methodology, including the home affairs minister himself who repeatedly claimed that Dalli’s methods have improved the prison system.

Besides his unquestioning loyalty to Dalli, Spiteri was also criticised for his lack of directly relevant knowledge and experience. In spite of having zero relevant qualifications, he was made head of operations at CSA shortly after the Labour Party was elected to government in 2013. Prior his tenure as head of operations at CSA, Spiteri worked as a spokesperson for the Environmental Landscapes Consortium and as a government spokesperson with a PN government.

The apparent lack of consequences for the failures of the prison administration directly managed and overseen by Dalli and Spiteri comes into greater focus when considering that Dalli was not only not held accountable, but was effectively awarded a promotion.

In February, The Shift had revealed that Dalli was given a €103,000 a year contract as the Maltese government’s special envoy in Libya to “coordinate with the Libyan authorities on issues related to illegal immigration,” just months after Dalli suspended himself from his role.

Since then, little has been heard of Dalli’s activities in Libya, a country that is now known as a haven for human trafficking, violence and predatory warlords and smugglers seeking to profit from people’s attempts at crossing over into Europe from Libya.

I am not a gambler, but my instinct tells me that Spiteri’s fate will be similar to Dalli’s faith
He will be transferred to some other job within some obscure government department with a much higher salary than currently earning.