Sliema residents have expressed their indignation at Labour propagandist Karl Stagno Navarra being given a reserved parking space in front of his residence in the area.

Those living or frequenting Sliema are more than familiar with the difficulty of finding a parking space – a fact they have to deal with on a daily basis unless they own a garage.

Yet, Stagno Navarra was given the privilege of a parking spot right beneath his residence, to the detriment of others who lost yet another spot. The permit was issued for “security” reasons.

Stagno Navarra, a known fraudster who was even dismissed from newsrooms for fabricating stories, shifted from the Nationalist Party to the Labour Party as power changed hands.

His fortunes changed under Labour, being given consultancies and even a TV programme on the Party’s station that he uses to divert attention away from scandals rocking the government by attacking critics and targeting individuals that demand accountability.

In a programme he dedicated to targeting The Shift, he accused this news portal of defending “the establishment”, seemingly unaware that the establishment consists of those in power he is paid to protect from criticism.

In a recent exchange on Facebook, he was taken to task by Mark Camilleri, a Labour militant and chairperson of the National Book Council who stepped out of the political game after Chris Fearne’s defeat in January that placed Robert Abela at the helm. 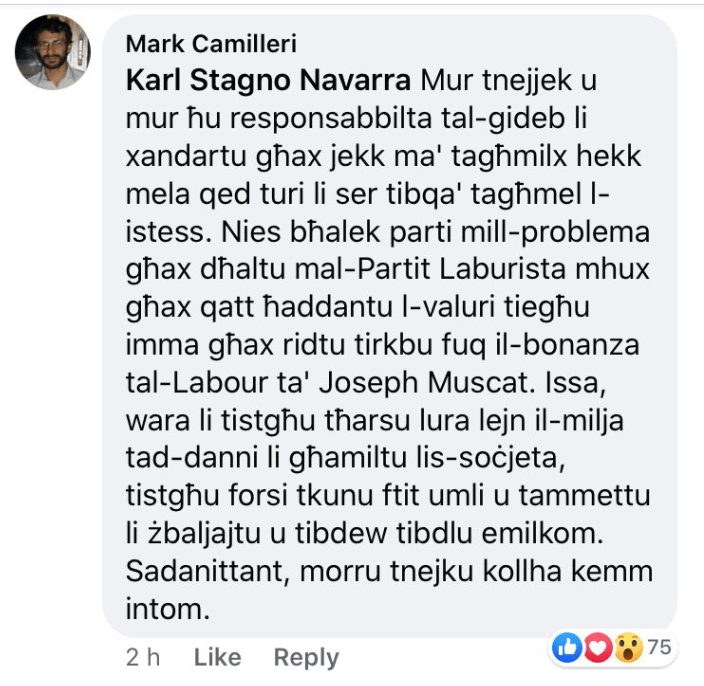 He called on Stagno Navarra to take responsibility for the lies he spread. “People like you are part of the problem because you joined the Labour Party to ride the bandwagon, enjoying the bonanza offered by Joseph Muscat’s Party, rather than because you endorse the Party’s values. Now, after you can see the damage you caused to society, you could perhaps show some humility and admit you were wrong and start by changing your behaviour.”