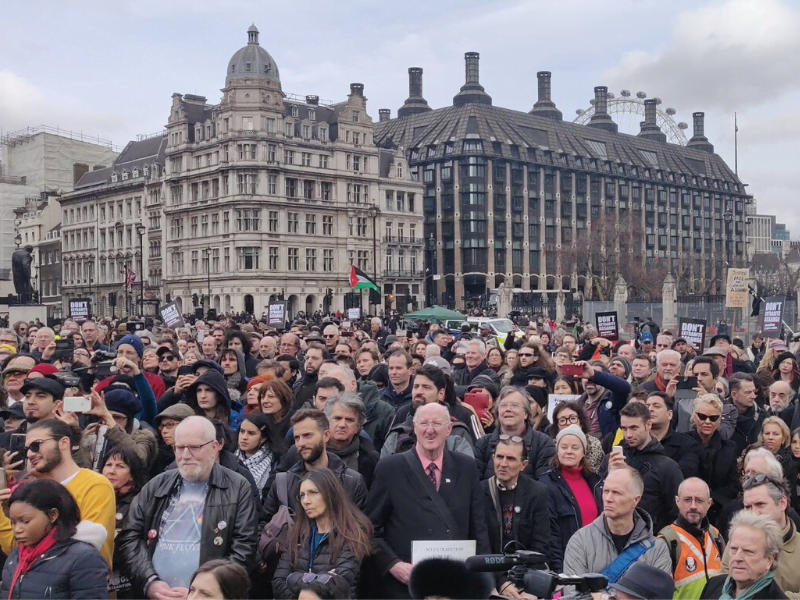 Citizens gather in London ahead of Julian Assange’s extradition hearing

Hundreds of people gathered in London on Saturday in a joint call to the British government to prevent the extradition of Wikileaks founder Julian Assange to the US, where he would face espionage charges.

The crowd walked under a grey sky to Parliament Square, protesting against the “threat to press freedom”. Banners carried slogans with phrases such as “Don’t extradite Assange” and “Truth is not a crime”. The hearing starts next week.

Huge turn out in support for #JulianAssange for today's demonstration held in London leading to his extradition hearing beginning on Monday#AssangeCase #FreeAssange pic.twitter.com/f5heDjDerj

Waters called on Prime Minister Boris Johnson to call off the “show” trial. “Julian Assange is an innocent man!” he said.

“If Julian is extradited for the sole crime of doing journalism on espionage charges, he will be the first but not the last. It will send a message to journalists all over the world that they will never be safe… it’s a big attack on press freedom worldwide,” said Hrafnsson.

Pan-European political movement Democracy in Europe Movement 2025 (DiEM25) co-founder Yanis Varoufakis told the crowd that they were protesting in order for “unarmed truth” to have the final word.  “So that Julian’s sentence ends neither with a bang nor with a whimper, but with a majestic, a marvellous full stop,” he said.

DiEM25 co-founder @yanisvaroufakis:
"We're here so that unarmed truth has the final word. So that Julian’s sentence ends neither with a bang nor with a whimper, but with a majestic, a marvellous full stop." pic.twitter.com/UJ32xhBvFT

A strike will be held in Sydney, Australia, on Monday.

Assange, the publisher of Wikileaks, is at Belmarsh high-security prison and has been charged for publishing the Afghanistan and Iraq war diaries and US embassy cables, important documents that many journalists around the world used.

The War Diaries provided evidence that the US Government misled the public about activities in Afghanistan and Iraq and committed war crimes.

Last week, Reporters without Borders (RSF) launched a petition to free Assange, and said that the publication of the documents by media outlets was clearly in the public interest, and not an act of espionage. “Julian Assange’s contribution to journalism is undeniable,” the organisation said. The NGO has collected over 39,000 signatures.

RSF also expressed concern about Assange’s health following a visit to Belmarsh prison in May by UN special rapporteur Nils Melzer. Melzer had reported that Assange had been deliberately exposed to inhuman and degrading treatment.

“The detention regime currently imposed on Assange appears to be unnecessary, disproportionate, and discriminatory and to perpetuate his exposure to psychological torture or other cruel, inhuman or degrading treatment or punishment,” Melzer had said

Earlier this month, more than 130 prominent German politicians, artists and journalists joined international organisations in their call to release the Wikileaks founder and signed a petition, saying that his detention was a “serious violation” of basic human rights.